Before I begin my review....
"It's not as good as The Wizard of Oz"

This is what I got told someone I know said after seeing Oz the Great and Powerful, and the first thing I thought after hearing this "Did you really go in expecting it to be a complete and utter classic that people are going to be in awe of for at least another 70 years and want to share with their children and grandchildren?"

That's called setting yourself up for disappointment.

When it comes to a prequel or a sequel of a film, I believe the best thing to do before you see it is just hope to enjoy it. Very rarely is the follow up as good as the first film, so don't set the bar too high. The good thing about a sequel or prequel to a film you love, is that it adds to your knowledge about the characters you loved and situations you enjoyed watching in the first film. If anything, you get to take this away from the film and you are not let down, because you enjoy seeing these characters again and learning more.

I myself are a bit of a Wizard of Oz fanatic and I know that people, like me, will enjoy Oz the Great and Powerful because it stays true to the 1939 classic. There are very little inconsistencies between the two and you really do believe you have learnt more about the original film by watching it. I was also a fan of 1985's Return To Oz, which is the sequel. However, both the prequel and the sequel are not as good as the original, but no one expects them to be. The Wizard of Oz was completely before it's time and there will never be another film like it.

By the way, if anybody was like me and wondered why there was no mention of the ruby slippers in Oz the Great and Powerful, I did a bit of research and found out why. Warner Bros own the rights to the elements of the original MGM film and as Oz the Great and Powerful is a Disney film, the studio cannot legally include mention of or images of the slippers in the film.

Oz the Great and Powerful does it's predecessor proud by continuing on The Wizard of Oz tradition with respect and beauty, something Disney have a knack of doing.

It is hard not to compare and liken Oz the Great and Powerful to the 1939 classic as it is a prequel to it, but it would be unrealistic to expect it to be as good as it. However, all those who are fans of and enjoyed The Wizard of Oz (which would be the large majority of those who have seen it) will enjoy this film as it stays true to the original as well as being accompanied by extraordinarily beautiful visuals and amazing special effects.

Oscar "Oz" Diggs (James Franco) is a Kansas sideshow magician when we meet him, who has dreams of being a man of greatness, but is struggling just to be a good man for the time being. He escapes the sideshow in a hot air balloon and gets caught in a classic Kansas twister. He lands in a beautiful land and meets the beautiful witch, Theodora (Mila Kunis) who tells him that he is in Oz. The coming of Oz to the land seems to fit the description of the prophecy in which a wizard will land and save the good people of Oz from the evil witch. Oz is not convinced that he is the wizard from the prophecy, but everyone believes otherwise.

The story of Oz the Great and Powerful is easy to watch. It doesn't evoke too many emotions, but it is a whole lot of fun. The screenplay isn't exceptional and it is a very light film. It is not powerful by any means, except visually. However, it is what it is meant to be and that is a family film. It is just very entertaining and enjoyable. 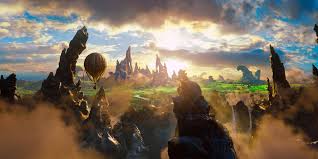 The film has such a magical feel to it and is very easy on the eye. There are some incredible images and some of breathtaking beauty. Oz's landscapes are beautiful and cityscapes such as the broken China Town and the Emerald City are exquisite. If you have seen Disney's latest version of  Alice in Wonderland , may feel there is a Wonderland feeling about Oz. It will probably not surprise you to find out that the producer of Alice in Wonderland , Joe Roth, is also the producer of Oz the Great and Powerful.

Again, it is hard to look at Oz the Great and Powerful as a stand alone film as it does have so many references to The Wizard of Oz. The film starts off in sepia and then turns into colour when Oz arrives in Oz, just like in the original. There is also the appearance of characters in Oz who resemble or mirror those who were in Kansas, again what happened to Dorothy in 1939. Prior knowledge of The Wizard of Oz is almost essential so that you know the meaning of several little things throughout the film, but that isn't a problem as you'd be so hard pressed to find someone you know who hasn't seen the film. It is a joy to see the original being honoured in so many ways in this new film, and director of The Wizard of Oz, Victor Fleming would have been proud.

James Franco completely personifies Oz. In the original, you get the feeling that once Dorothy and her friends discover him behind the curtain, he comes across a bit ashamed of himself that he isn't all that he pretends to be. Franco plays on this and shows how the wizard over does certain things he does to try and convince others how wonderful he is. Franco is perfectly cast and wonderful to watch.

The three witches are all very well cast and are played by three of the most beautiful women in Hollywood. Michelle Williams is just gorgeous on screen as Glinda and is so likable, just as her character is supposed to be. Strong, but so very sweet. Rachel Weisz plays subtle evil very well and Mila Kunis becomes terrifying through the film and watching her change is excellent.

Joey King, who plays the little girl in the side show and the China Girl in Oz is wonderful. King, at 14, is one to watch. She has been in various films and glows in each of her roles and outshines many of her older co-stars. She is definitely a star to watch as she progresses.

Oz the Great and Powerful does The Wizard of Oz proud. It is a film lover's eye candy and is sure to become a guilty pleasure to many.
7/10