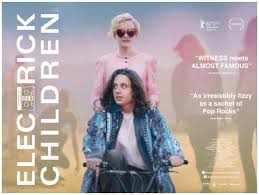 Before I begin my review…
I have the very great pleasure of being able to review the enchanting and sweet, with a dash of quirkiness, coming of age film, Electrick Children.

Electrick Children was the official selection at the Berlin International Film Festival in 2012 and has received wide acclaim since its first screening. Rebecca Thomas’ film has since had screenings at several film festivals including the 2012 SXSW Film Festival, AFI Fest and Sydney’s Cockatoo Island Film Festival. It is just about to have its opening at the IFC Theater in New York City on the 8th of March, which will be followed by a national roll out at a later date.

This is Rebecca Thomas’ first feature film, after directing the short, Ivan Sings and writing the screenplay for and starring in the Sundance short, Nobody Knows You, Nobody Gives A Damn. She has been named by Variety as one of the 10 directors to watch in 2013. We are very excited to see what Thomas has in store for us in the future, because Electrick Children is an absolute treat.

Director Rebecca Thomas’ feature film debut is orchestrated perfectly with beautiful cinematography and perfect casting choices, particularly that of Julia Garner. Electrick Children seems almost magical, but has the uncanny ability to take a situation some may see as completely bizarre and make it flow so smoothly that it seems like it is completely natural.

Fifteen year old Rachel (Julia Garner) lives and was raised in a fundamentalist Mormon community completely sheltered by the outside world, but utterly enthralled by anything to do with it. She becomes captivated by a cassette player, as she has never seen one before and finds a song on it, which she has never heard before and seems to be forbidden. It is a few months after this she finds out she is pregnant and is convinced that it was the song that impregnated her. Her parents (Cynthia Watros and Billy Zane) decide that she must marry, causing Rachel to flee to Las Vegas in order to find out where the song came from. It is here that she and her brother, Mr Will (Liam Aiken) meet a group of young adults, including Clyde (Rory Culkin), who change the way they see and understand the world.

The concept of immaculate conception by cassette player sounds completely strange and unusual when written down, but when it is played out on screen and paired with the innocence of Garner’s Rachel, it feels like it may just be natural. It is an absolute talent that Thomas has taken a concept like this and made it feel believable.

One of the best things about Electrick Children is that it is captivating from the very first scene and does not waste time in getting into the story. At no time during the film do you foresee where it is going and you crave knowledge of how it is going to end. It isn’t really an intense film, but it is intriguing and enthralling enough to get you captivated to the very end.

The film is shot beautifully, and every shot could be paused and looked at as fine photography. The beauty in the Mormon community and its surroundings are captured well on screen. It is very well contrasted to the bright lights of Vegas, but the film’s magical quality makes all locations seem just so pretty.

Julia Garner is absolutely perfect as Rachel. Her innocence and naivety is just so believable. It is portrayed perfectly particularly in the scene where she finds out for sure that she is pregnant and is in absolute wonder, while her mother is terrified. It is a beautiful moment as it shows pure innocence about what has happened and what is to come. Another beautiful moment is when she discovers what the world of rock n’ roll really is, and she is shocked by it. Garner carries the film like she was born to do it, when this is actually her first leading role. 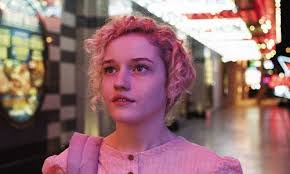 Rory Culkin is very good in the film, although it is a role which we feel like we have seen him in before. His character shows growth and development right throughout his time on screen. Billy Zane is also very good as Rachel’s father, as he doesn’t do anything threatening, yet remains very intimidating. Cynthia Watros is perfect as Rachel’s mother. She’s a nurturing mother, but struggles to hold herself together in the circumstances.

Electrick Children is a beautiful coming of age film, which intrigues as well as entertains. The type of film you think about later and smile.