Before I begin my review…
I feel like I have come full circle with The Host cycle.

The book will always be plagued by the fact that Stephenie Meyer, creator of the Twilight phenomenon penned it. I was completely sceptical of it and I know many other people who assumed before knowing anything about it that it was just another Twilight.

So I read the book and was pleasantly surprised to find out that there were no sparkling vampires or chiselled werewolves to speak of. For my tastes, I enjoyed The Host far better than I did the Twilight books. I read 63 books last year including The Host (yes, I am a massive book worm as well as being a cinephile!) and it was one of my favourites for the year.

So naturally I was very excited about the upcoming film. Until the first few minutes of it when I discovered that I should have realised that it could never work as a film the same way it did as a book.

That voice inside her head.

As soon as I heard Melanie voice for the first time inside Wanda’s head, it was moment where I felt like smacking my forehead with an open palm. I was so excited about a book I really enjoyed being made into a film that I forgot in my excitement this crucial piece of information that could break it.

Some good books should be left just as that. Good books. We don’t need to make a movie out of it. Just because it is a good book doesn’t scream that the film will work.

Why don’t film producers work more on mediocre books so it’s image can be improved by creating a better film?

I think I just spoilt the ending of my review…. 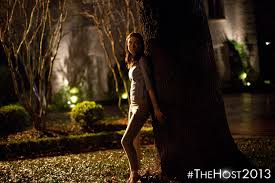 It is said often enough that the book is normally better than the film and the usual reason for that is that some books just don’t transfer to the screen well.

The Host is unfortunately one of those films. Various aspects of Stephenie Meyer’s novel have had some bad treatment and have not been used in a way that makes them effective on the screen and instead makes them quite ridiculous. The story itself isn’t bad and is really quite creative, it’s just a shame that director, Andrew Niccol and Meyer in the producer role made some bad production decisions.

An alien race has taken over the human race in order to eliminate all hatred and violence and bring Earth to peace. They have done this by inserting Souls into human bodies and thus eliminating the human soul. Wanda, or Wanderer as she is known as at the beginning of the film (Saoirse Ronan) has entered the body of Melanie Stryder, who refuses to completely fade from her physical form. Wanda constantly hears Melanie’s voice I her head trying to get her to go to and protect her loved ones from being taken over by this alien race. Seeker (Diane Kruger) is suspicious of Wanda and keeps a close eye on her before Melanie convinces Wanda to seek out her Uncle Jeb (William Hurt), brother Jamie (Chandler Canterbury) and her love, Jared (Max Irons). While Melanie is committed to Jared, Wanda is drawn to Ian (Jake Abel), forming a bizarre love triangle which involves three bodies, but four souls.

The Host has all the potential in the world with an intriguing and unique story, but it lets itself down in so many areas. The worst part of the film is the way in which Melanie’s voice inside Wanda’s head is created. It’s understandable that the film makers wanted to show how loud and clear her voice is inside Wanda’s head, but it sounds like nothing more than a dubbed over voice. Of course that is what it is, but that loses all the magic as it brings it seems so constructed. Melanie’s dialogue just sounds ridiculous at times and her constant “No! Please!” just becomes irritating and almost laughable. 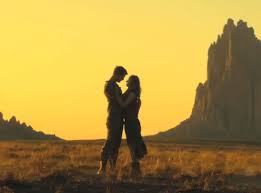 There are other ways which this inner voice could have been achieved and heard by the audience, such as a quieter voice or perhaps even with some background noise, so that the audience could focus on the tension forming in Wanda’s mind and the expression on her face displaying this inner turmoil.

The film doesn’t really find momentum until about halfway through it (which is coincidently when Melanie pipes down), but even then doesn’t gain enough to create suspense and tension. The story is very interesting and the concept is intriguing, but the script doesn’t support the plot in the way which it should and doesn’t do it any justice.

The cinematography isn’t bad and some images are quite beautiful. However, the editing is pretty amateur, especially when it is chopping and changing between Wanda’s dream and the image of her in bed.

Honestly, the character of Wanda is not a very interesting or likable character. Obviously Wanda is supposed to be a very placid creature and is not supposed to experience emotion, but you feel no real attachment to the lead character and that is never a good thing. You are indifferent about who ends up with who and what happens to Wanda. This is not Saoirse Ronan’s fault, she was just not given much to work with. It’s a very lack lustre role. 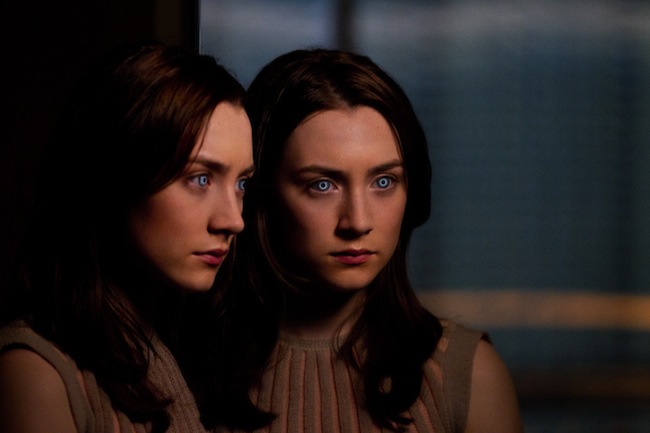 Diane Kruger is not half bad as The Seeker. Even though his role wasn’t really a fantastic one and his performance wasn’t extremely powerful, you can see a glimmer of hope in Jake Abel that he does have big things in store for him. He shows emotion where need be, but again, his role calls for it to be pulled back. The Host doesn’t show what he really is capable of.

So many films have potential to be greater than they are and The Host isn’t one of them. People who haven’t read the book may flock to see it once they hear that just because it is based on a book by Stephenie Meyer, it doesn’t mean it is about vampires, yet that doesn’t mean you will like it any better.

You may have also seen Saoirse Ronan in....
The Lovely Bones
Hanna