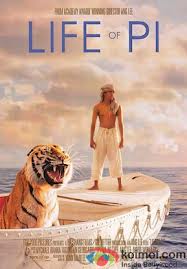 Before I begin my review….
I didn’t get to review Life Of Pi as part of my Oscars lead up, but better late than never!

I read the novel, Life Of Pi by Yenn Martel at the beginning of 2012. I thought it was a brilliant book with absolutely beautiful use of language. However, I knew this film was in production and was to be released later in the year. This troubled me because the whole way through the book I was thinking to myself  ”How are they going to be able to make this in a movie?”

It looked like it was going to be one of those films when it was released, people would say “They should have just left the book as it was and never made a movie out of it”.

That is, until I heard Ang Lee would be the director.

There is no denying that Lee is an amazing director. He was the perfect person for the job. Did he deserve his Oscar for direction for Life of Pi? I believe so. You know why? Because he took a novel that many people including myself thought could never be made into a film because of the reason that it was the language used that made the book so amazing and also because there are large periods of the book where not much happens, and made it into a well above average film. Granted, yes there are still parts in the film that not much happens, but these moments give you the most amazing visual moments of the year in film. Lee made some amazing choices for his film. Choices which won him the Oscar.

Review
There is no denying it, Life of Pi was the most visually beautiful film of 2012.

Ang Lee’s latest achievement shows us how far film has come in regards to cinematography and visual effects. When you think of incredible visual effects, an action film of sorts is normally the genre you think of. However, Life of Pi is far from that and uses what is available to us in the film these days to its utmost potential. It’s beauty is awe inspiring.

Pi Patel (Suraj Sharma) grew up in a zoo in India with his parents and older brother. His parents make the decision to Canada in order to start a new life and set off for their new life on a Japanese cargo ship with all their animals. However, the boat hits a violent storm and the boat sinks leaving only Pi and an orang-utan, zebra, hyena and Richard Parker, the zoo’s Bengal tiger alive. As Richard Parker uses the animals as food, Pi learns survival techniques like no other to stay alive stranded in the middle of the ocean with a hungry Bengal tiger.

It was always going to be a hard task to adapt Life of Pi from book to screen. Large parts of the novel by Yenn Martel involved Pi’s thoughts as he sat on the boat, which were always going to be hard to bring to the screen. The length in which Pi was on the boat was also going to be hard to bring to the screen without it becoming overly boring for members of the audience. The screenplay does lack in parts due to these potential problems, as Pi’s time on the boat does feel a tad tedious. However, the whole point of the film is about a man on a boat so it is important that you feel the stretch of time which Pi is on the boat.

It is the visuals that make this film so incredible. There are so many moments which make the film an absolute visual delight. The visuals chosen for the scenes in which Pi is telling an important piece of the story are tinged with magic. The opening of the film in the zoo with all the animals going about their daily business is a light and fluffy moment and the swimming pool scene is almost comical in the graphics.

The whale and island scenes are also two of the most visually stunning pieces in the film.

The CGI of the animals, particularly of Richard Parker is incredible. It will probably come as a surprise to some that the tiger is a CGI creation and that the only scene in which a real tiger was used was when he is swimming in the ocean. The images are so life like that you truly believe that it is a tiger, orang-utan, zebra and hyena being filmed. It is also incredible that Life of Pi was largely filmed on green screen and not on the ocean.

The musical score is beautiful and provides the perfect background to such amazing images. It also gives the film emotion where words are not used.

Suraj Sharma is very good in this film, particularly considering this is his acting debut. He carries much of the film by himself and does the perfect job doing so. In the scene where he realises how much he has lost he is really very good, but he doesn’t give as much emotionally as he could throughout the film. He was the best man for the job and Lee got the best he could out of him, but there isn’t a great emotional attachment to the character of Pi.

Life of Pi is just complete and utter visual bliss from beginning to end. It is so wonderful to see the amazing visual effects available to film today used in such a beautiful and elegant fashion.