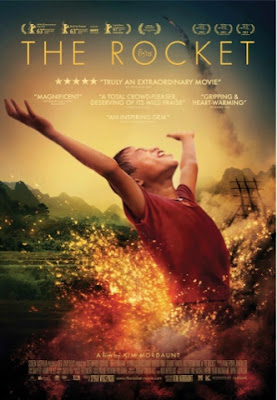 The Rocket will be screening at the Melbourne International Film Festival on the 8th and 10th of August 2013. Please see official site for more information http://www.miff.com.au

The Rocket will open in Australian cinemas on the 29th of August and is distributed by Curious Films.

Winner of the Sydney Film Festival's Audience Award this year,  The Rocket is a piece of pure beauty.

A film that will both break your heart, but also fill you with love and joy, The Rocket is one of the first films for international distribution that is set and filmed in the war torn country of Laos. It gives the world a look inside of the broken yet beautiful country while telling a coming-of-age story like no  other. This combination with the addition of incredible performances of memorable characters makes Kim Mordaunt's debut feature film one of the best of the year.

A set of boy twins are born in Laos, where it is believed that each set of twins contains one child which is a blessing and one which will bring bad luck on the family. One of the boys is a still-born and the other is allowed to live, but Ahlo (Sitthiphon Disamoe) is always believed to be the bad luck twin, especially by his grandmother (Bunsri Yindi). When his family is forced to move from their native home, they come across hard times. Ahlo believes that he can win a rocket competition and win the prize money that will allow his family to live on their land and grow the mango trees he wants to plant in rememberence of his mother. 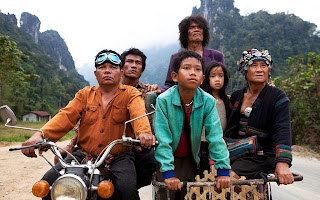 Writer and director Mordaunt has done an absolutely incredible job at telling the story of Laos by telling the story of Ahlo and his family and friends. There are not two stories being told during the film, but we are learning just as much about the characters as we are about the country at the same time. The Rocket is the film that it is because of the country it is filmed and set in and as it is so rare to have a film set in Laos, it is completely original and like no other.  The Rocket Festival is indeed a real competition and according to Mordaunt and producer, Sylvia Wilczynski, is almost metaphorical in the most bombed country in the world, as they are sending the bombs back up to where they fell from. That really says something about the beautiful people living in Laos, as they have made a happy occasion out of something so terrible. It is this spirit that assists in the overall beauty of the film, as it starts off so heartbreaking, but turns into something so uplifting.

The cinematography and musical score do nothing but give complete and utter support to the beauty aspect of the film. The landscape shots are breathtaking and you can smell the incense in the air. One incredible scene is when Ahlo is swimming and the camera sees everything he sees, including all the fallen spiritual statues underwater. The music is wonderful and fitting for every scene. There is traditional music, but it is a great moment when James Brown suddenly starts blaring as Ahlo is being chased. 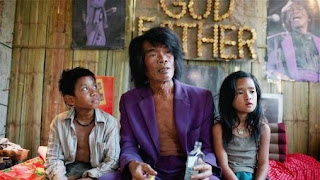 The characters and those who play them are just as wonderful as each other. Both Sitthiphon Disamoe and Loungnam Kaosainam, who plays the little orphan girl, Kia are incredible in their very first on screen roles. Disamoe has talent beyond his years and plays a character who the audience connects with and instantly feels sorry for. However, when Kaosainam is on screen, she absolutely steals the show. At such a young age, she is as good a supporting actress as any you will see. Like Disamoe, she is beyond her years and a complete natural on the camera.

Purple, who is played by Thep Phongam is one memorable character, particularly for his obsession with James Brown. He has some hilarious scenes and is like an enigma for the better partof the film. Alice Keohavong, who plays Ahlo's mother, Mali, cannot be forgotten. When on screen, you are bewildered by the fierce love she has for her son. It is so intense how she feels for her son and it is not hard to believe that he is her everything. Bunsri Yindi, who plays Ahlo's grandmother is also a fierce character, but has some very funny moments.

The Rocket is one of the most incredible films of the year. It is a flawless film which is entrancing, suspenseful and a masterpiece. A wonderful way to capture the true essence of Laos.