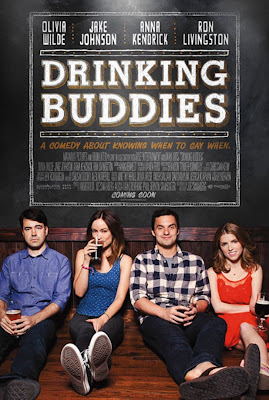 Drinking Buddies screened as the closing film for the 2013 Possible Worlds Festival of American & Canadian Film. Also screened at the Melbourne International Film Festival on the 27th of July and 7th of August 2013.

There is something so incredibly charming about this film in the way that it is connects with you on a personal level by how real the characters and their situations are. The technique of having no script and instead complete improvisation allows for the actors to completely immerse themselves in the situation and makes the film so realistic. The result of this technique may make Drinking Buddies slow and uneventful for some, but for others, they will understand how the result is more like watching life than watching a film and be charmed.

Kate (Olivia Wilde) and Luke (Jake Johnson) are co-workers at a beer brewing company who are as close as close can be and on the borderline of becoming more than friends. That would be the case if Kate didn't have Chris (Ron Livingston) and Luke didn't have Jill (Anna Kendrick). When the two couples take a weekend away together, Chris and Jill share a stolen kiss and suddenly everything changes. 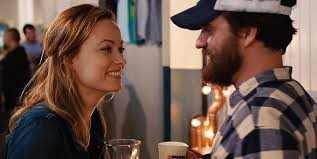 Everything changes when Chris and Jill kiss, but not in the dramatic fashion in which such a kiss would change everything in a typical film. In Drinking Buddies, we see life in motion on screen. All the signs that point to the way each of the characters feel about each other are there, but they are all so subtle. The camera catches all these little hints of attraction between the characters and the signs of secrets being kept, but without the help of the camera you may not have been able to pick them up in all their subtlety. This is what makes the film so beautiful as it shows how all this would happen in life, without the over-exaggeration normally administered in your typical romantic comedy film.

It is interesting as well how with the film being told in conversation style, the humour also changes. It feels like it is easy to laugh at the things the characters say as if you were there with them and sharing a personal joke with them. There are some very funny one-liners in the film, which don't seem particularly funny when put on paper and taken out of context, but are so funnily appropriate in the film.

Drinking Buddies also does give you some things to think about as far as relationships are concerned, particularly about the moments that define your perfect soul mate. The film doesn't click into cliché mode and as a result there is a sense of suspense as to what is really going to happen between these four people.

While some people will be in awe of the result of this film in the knowledge that it is improvised, it still may not be everyone's cup of tea. Some people will find it quite uneventful and tedious in parts as a result of how subtle it is. Drinking Buddies is not a typical rom-com where the romance and comedy are overemphasised and it is just like watching regular people in regular situations on screen. So for some it may not be as entertaining as they may like it to be.

The four lead actors seem to strive in their roles under Joe Swanberg's direction. Olivia Wilde is absolutely wonderful as Kate and this is her best performance to date. She is so natural and her character is so real and full of personality. Wilde is also very convincing and wonderfully funny. Anna Kendrick is also wonderful and while her Jill doesn't seem as though she is a very complex character, she is a joy to watch. Jake Johnson is so incredibly likable as Luke. Although it is Wilde who is the star, Johnson is such a joy on screen and his Luke is perhaps a tad more likable than Kate.

Drinking Buddies is a great example of art reflecting life. The fact that it is purely improvised makes the film all the more likable. As has been said by many who have seen the film, best to be viewed and enjoyed with a beer in your hand.


You may have also seen Olivia Wilde in......
TRON Legacy as Quorra