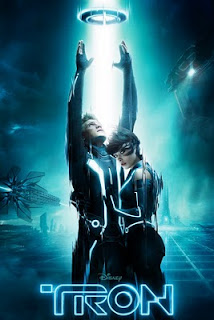 In My Own Words
How excited are sci-fi fans about this film? After 28 years since the original "TRON", fans finally get to see the revamped version of the old Disney classic. I never watched the original "TRON". One of the reasons being that I was born in 1982 so it wasn't a new release I got to see at the cinema. My only memory of it is of it being one of the trailers on my other Disney movie videos (yes, videos....let me know if anyone needs reminding of what a video is). At that point in time I was more interested in Disney films with talking animals rather than science fiction films. Since then, it is not a movie I have seen on DVD. I believe it is on DVD, but it is very hard to come by. I would watch it if I could find it! I am sure a few of the questions which I have about "TRON Legacy" would be answered if I had seen "TRON". Maybe I would have appreciated it more, but I'm not quite sure. Maybe I would have been comparing it too much and would have hated it! Who knows! Personally I thought the best things about the film were the music and the visuals. Without the impact of those two features, the movie would have just been a confusing and boring 2 hours. I never thought I would credit Daft Punk with making a movie worthwhile. Of course, if you are a sci fi fan, you are obviously going to disagree with me. This film could well be your bread and butter.

Review
28 years after Disney released "TRON" in cinemas, it's sequel "TRON Legacy" finally comes to our screens. The original "TRON" was seen as a break through in cinema as it was released at a time when computers hadn't been around for very long and a movie about someone being sucked into a computer system created a great deal of interest. However, 28 years later in 2010, it doesn't create quite the same interest in our worlds where the internet is a necessity to many. The story is out dated and dull, only to be saved by the impressive visuals and soundtrack. Sam Flynn (Garrett Hedlund) is the son of Kevin Flynn (Jeff Bridges), the video game creator who has been missing for years. When Sam investigates in his father's abandoned video game arcade, he finds himself sucked into the digital world which his father created. However, the world is now ruled by Flynn's creation gone bad, Clu ( also played by Jeff Bridges). Sam soon finds that he is the enemy of Clu and that his father is alive and living in exile inside the Grid.

It just seems as though Disney left it way too long to release "TRON Legacy" in order for it to be a success. Disney only confirmed 2 years ago in 2008 that their were serious aboit releasing a "TRON" sequel. Leaving it this long meant that times have changed as have what people find intriguing. We have seen many movies which are set around or in computer generated worlds that in the age of computers where anything is possible, it is hard to impress. Also, there will be many people who haven't seen the original "TRON" as it was released nearly 30 years ago.The film will pose many questions for those who haven't seen the original "TRON". For a film that is hard to come by these days on DVD, this was always going to be a problem. One can guess themselves what happenned in the first film, but there is still a great deal of film concepts that would become so much clearer for the audience if they had seen the first. Unlike many other sequels, this film is easier to be judged as a stand alone film rather than a sequel. This may not do the film any justice, which is a rarity for sequels.

On the other hand, visually "TRON Legacy" has perfect timing. The film was not made for 3D, but post-production made it possible. The computer generated images during the film, such as the games of survival are truly amazing and exciting to watch. The techniques used to make Jeff Bridges 30 years younger are absolutely intriguing. It is amazing what can be done during post production of films these days. The costumes and make up are also very impressive. The soundtrack to the film, as done by Daft Punk, is one of the key elements of the film. Even for people who are not fans of the electronic scene, there is no denying that the music adds to the effectiveness of the film. Each piece of music enhances the scene which it is in and brings it to life. The direction and post-production of this film is really quite commendable.

The acting in this film is quite simple. The only two actors who show any type of emotion are Jeff Bridges and Garret Hedlund in the reunion scene and goodbye scene. Otherwise their acting is quite bland. Olivia Wilde as Kevin Flynn's sidekick, Quorra doesn't do anything spectacular in this film and it is not a very hard role for her to play. As Zeus, Michael Sheen seems to be channelling his inner David Bowie, and does so successfully. He is un-nerving and bizarre, but strangely interesting. The film is actually quite well choreographed during scenes such as with the sirens supplying Sam with his disk.

"TRON Legacy" is a hard one. The story and script is outdated and the acting is not spectacular, as one would'nt expect from a film such as this. However, it takes full advantage of the CGI which is available today and the film strives on this throughout the film. Without the CGI, there wouldn't be much of a film. Sci-fi fans will love this film, while others will either take it or leave it. The CGI can only take you part of the way to a good film, a good story and script will take you the rest of the way. Which makes "TRON Legacy" only partly a good film.
5.5/10