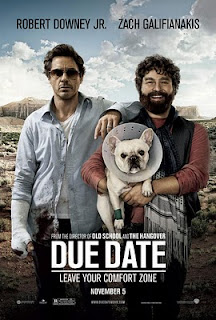 In My Own Words
I'm a prude. I can't help it. I will go to some films and get completely grossed out by some things. But...being a movie critic, I need to suck it up princess. I need to see past all the crude jokes I see in some films and review it as a whole. I mean, if you're a critic and review a film based on your personal interests and tastes only, you're going to be a pretty lousy critic. You're only going to connect with those who are exactly like you and let's face it, nobody is exactly like you so the only person you are connecting with is yourself. Of course you should always be true to yourself and not do and say things just to please other people, but you have got to judge a film for the whole package which it is. "Due Date" is one of those films which has scenes which made me squirm in my seat and just turn anyway. I won't say too much because it will be a spoiler...but for those who have seen it, the dog's scene in the car when they are trying to sleep. But whatever turns you on, really. I think perhaps the film that personally grossed me out the most was "Van Wilder: Party Liasion" and the scene that grossed me out the most in that film also involved a god. What is it about animals that makes film makers want to make gross scenes about them? Again, this is just me. There are millions of people out there who have different taste than me. So I won't talk again about this issue in my review. Thats what "In My Own Words" is for.

Review
"Due Date" has been hailed as the new "The Hangover". It does share many similarities...Todd Phillips is once again the director, it's about a male bonding experience and Zach Galifianakis once again appears as the "strange" guy. Yes, there is definately similarities, but it is not the next "The Hangover". Peter Highman (Robert Downey Jr.) is on his way back from Atlanta to Los Angeles to be there for the birth of his first child. Unfortunately, due to a number of unfortunate events, all due to aspiring actor Ethan Tremblay ( Zach Galifianakis), he gets denied boarding on his flight, losing his wallet and having to find his own way across the country back to his wife, Sarah (Michelle Monaghan). With a travelling partner like Ethan, this is going to be no easy journey.

Being as "Due Date" does have so many similarities to "The Hangover", one may be forgiven for believing that this is the sequel. It also takes in elements from Todd Phillips other films such as "Old School" and "Road Trip". Therefore, the making of this film would have almost been a walk in the park for Phillips', it's not like it is something he hasn't done before. So all up, he does direct the film well. He certainly knows what he is doing when it comes to editing, camer angle choices and casting for this film. Even though "Due Date" isn't as funny as his last film, it would be unfair to say that the film isn't funny at all. There is some clever dialogue and clever verbal jokes, although they are not the most original jokes. For example, one can always see where a tin of someone's ashes in a comedy is going. The humour won't be to everyone's liking, but if you have enjoyed Phillips' in the past you will enjoy this film. The direction where the film is going is also very predictable, no guessing is really needed for the end. As they say though, it's the journey that matters, not the destination.

Zach Galifianakis plays exactly the same role as he played of Alan in "The Hangover", there is just more of him. Some of his antics are quite funny, but others are again just predictable and after time can just get quite annoying. There is no doubt that Galifianakis can play other roles as we did see him do in "Up In The Air", this just seems to be familiar and safe territory for him. He doesn't do the role badly at all, and he serves his purpose as the painful travel partner well. On the other hand, Robert Downey Jr. is great and so likable in this role. He plays the role of Peter with so much ease and is completely natural and believable. It is so easy to forget that he is acting and he keeps the film grounded. To Phillips' credit, he did definately pick the two perfect people for the lead roles for this film.

"Due Date" is predictable and not the funniest film you will see this year, but it does it's job. It gives the audience a few laughs and keeps them entertained. Perhaps next time Todd Phillips will step outside his comfort zone and bring something different to the table. With "The Hangover Part II" in production as we speak, we can't expect anything different from him for awhile. Can he make any films other than those male bonding road trip films which he is so good at at this point in his career? We are yet to see.
6/10