The Chronicles Of Narnia: The Voyage Of The Dawn Treader 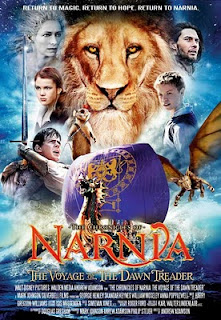 In My Own Words
Personally, I think this series of The Chronicles of Narnia has worn itself out. I'm not going to harp on about how "The Lion, The Witch And The Wardrobe" is the core of the chronicles and definately the most popular of the books.2008's "Prince Caspian" was definately anything but a flop and although not as successful as "The Lion, The Witch and The Wardrobe", still highly acclaimed and very entertaining. However, with "The Voyage Of The Dawn Treader", the series just seems worn out and tired. The magic of Narnia doesn't hold up in the third film. Maybe it is because Peter and Susan aren't part of this journey, or maybe because the creatures in this film aren't quite as cute and fluffy as in the other films. When does a series of film wear out? Obviously, other book series have been made into films and have caught the public's attention from the first to the last book such as Lord Of The Rings and Harry Potter. Maybe it does come back to the fact that with The Chronicles of Narnia, "The Lion, The Witch And The Wardrobe" is far more popular and wider read than the other books. Have "Prince Caspian" and "The Voyage Of The Dawn Treader" just been sequels to the first film? I doubt that I would be asking this question and I would'nt have thought that the series has tired out if I actually enjoyed the film more.

Review
"The Chronicles Of Narnia: The Voyage Of The Dawn Treader" is the third film in the latest adaptation of C.S. Lewis' novels. It is third in sequence and third in order of worthy acclaim. This film seems confused, it doesn't know whether it is a movie for adults and children alike, or a childrens film. Some of it can seem like a film for everyone, but it can seem extremely simple and a little too light. Almost like it is was made especially for children under 10. If it was made to be a film primarily for young children, this would be fine and it would be critiqued as a childrens film, but it is not so will be critiqued as a film for families and singles alike. .....which is unfortunate for the film makers. "The Voyage Of The Dawn Treader" sees Lucy (Georgie Henley) and Edmund Pevensie (Skandar Keynes) return to Narnia with their cousin, Eustace (Will Poulter). They once again meet up with Prince Caspian (Ben Barnes) as they try to defeat the new evil in Narnia.

"The Voyage Of The Dawn Treader" is a beautiful film visually to watch. The visual effects are very impressive and the fantasy segments are highly realistic. The special effects are perhaps the best thing about the film. However, while watching the film you cannot help but think that you are watching a cross between "Lord Of The Rings" and "Pirates Of The Caribbean". As impressive as the visuals are, it feels as if it has been seen before. The Narnia chronicles, with this film, just seem to have outdone they stay this time around. It doesn't feel suspenseful at all and can seem to drag throughout the film. The simplicity of the film seems out of place at this stage of the series. Yes, it is based on the book and the film makers are staying true to the book so they can't be blamed too much, but with the right script, editing and acting, this could have been avoided.

Simply, the acting isn't to write home about in this film. Ben Barnes does not give a bad performance in his second film as the courageous Prince Caspian. It is not an Oscar winning performance, but brings all the can be bought into the role as a fantasy prince. Skandar Keynes is also not altogether bad as Edmund and is probably the best out of the younger actors in his role. Georgie Henley's performance seems forced and completely lacks emotion. In the earlier Narnia films, she was adorable as youngest Lucy, but it seems as if it may have been her childish cutesiness which made her successful in the role previously. Henley is in that awkward stage of being between the child and adult actor and it is actually painful to watch. Will Poulter's Eustace is supposed to seem completely painful, but his performance is one which you would expect to see on stage in school theatre. It is harsh, but his acting in the film is completely amatuer and more stage acting than film acting. Of course, this cannot just be blamed on the actors, but also on Michael Apted's direction. It is so obvious that there was a change of director from the first two films to this film and Apted is definately not a bad director, but maybe he is just not accustomed to how he should be directing younger actors in a fantasy film. However, its not a talent which one would normally have.

It is hard for a film which is part of a series of films to be reviewed as a stand alone film. It is harder to do so when as a stand alone film it fails more than as a film in a series. "The Voyage Of The Dawn Treader" seems like a mess on screen and would definately not be successful if it weren't part of "The Chronicles Of Narnia". As it is part of the chronicles, it will still be successful at the box office as no one can resist the charms of C.S. Lewis.
5.5/10