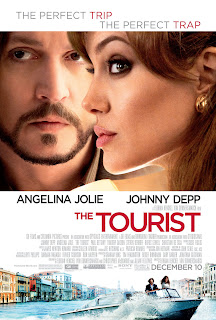 In My Own Words The combination of Johnny Depp and Angelina Jolie is a film makers dream. Two of the biggest movie stars on the planet and two of my personal favourite actors. Johnny Depp is just likable in every role he has been in the past few years. Even in "The Libertine" where one of his first lines is "You are not going to like me". He failed at that because I still found him likable. He's not afraid to take risks, I think he is more afraid of taking on a role people might consider "normal". He has been nominated for 3 Oscars, but has yet to take home one. I would love to see him win one, but what will it take? He's been nominated for"Pirates Of The Carribean: The Curse Of The Black Pearl", "Finding Neverland" and "Sweeny Todd: The Demon Barber Of Fleet Street". All amazing roles completely out of the ordinary yet no golden statue. What does he have to do?!

Then there is Angelina. The actress who has show-stopping beauty, but is sometimes more popular for what she does off screen than on screen. Her past romances, kissing siblings and being known as a "home wrecker" in the tabloids overshadow how truly amazing she is an an actress. She has been nominated for two Academy Awards and took home the big one in 1999 for "Girl, Interrupted". I think she is brilliant, regardless of what she does in her private life. After all, what is true about her so-called private life that we read in the celebrity gossip magazines?

I've already established that Depp and Jolie are amazing actors, but do they work together? These are my own words and here is my review.

Review
Everything about "The Tourist" points towards a winning combination. It stars Johnny Depp and Angelina Jolie who are two of the biggest movie stars in the world at the moment, has an Oscar winning director in Florian Henckel von Donnersmarck and it's set in a beautiful city like Venice. It seems like nothing could go wrong, or could it? "The Tourist" was always going to do well at the box office no matter what happenned in the film. It is one of those films which some people are going to love and others are going to find ridiculous. "The Tourist" is an action thriller which borders on comedy. Unfortunately, the comedy aspect makes it hard to take the film seriously when you feel like you should be taking it seriously. Frank Tupelo (Johnny Depp) is a maths teacher minding his own business on a train trip to Venice when a beautiful, mysterious English woman, Elise (Angelina Jolie) sits next to him. Little does he know, he is part of a plan of Elise's elusive love, Alexander Pearce to detour the authorities and make them think that Frank is actually him.

Set against the amazing backdrop of Venice, "The Tourist" seems to be a very confused film. It is not quite sure what it is. It could have been a serious film and it seems like that is what the film makers would have wanted, but with Johnny Depp involved it doesn't come across that way. Not to say that Johnny Depp can't do serious roles because he definately can, but his character of Frank is quite comedic. On the other hand, it is not as funny as it should be to qualify as a comedy. This confusion makes the film seem a bit messy, although it does play out perfectly and runs smoothly on the screen. Visually it is an amazing film to watch. Henckel von Donnersmarck has pieced the film together beautifully and the cinematography, editing and visuals are amazing. Scriptwise, it is a good story and completely unpredictable. Everytime you think you know what is going on, something will happen to change your thoughts. It is one of those films you will walk away from and the more you think about it, the more everything will start to make sense. However, it is the scrip that provides the comedy moments which creates the confusion of the film.

Both Johnny Depp and Angelina Jolie are stars, there is no doubt about that. Johnny Depp is able to show so much emotion in just his facial expressions and in his eyes. He is able to make the audience feel great pity for him at the beginning of the film. The character of Frank feels much like the Inchabod Crane who Depp played in "Sleepy Hollow". Jolie shines on the screen, the camera just adores her. Depp and Jolie visually look good on the screen together, but there isn't a great deal of chemistry between the two. Maybe they were afraid of creating too much chemistry between the two in case that started creating rumours.