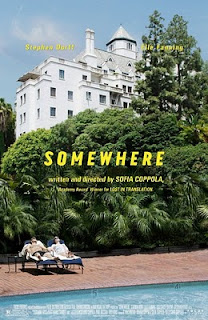 In My Own Words
I have been looking forward to seeing "Somewhere" ever since I first heard about it. I am a Sofia Coppola fan, but she wasn't the main draw for me to this film. Nor was it Stephen Dorff. It was the Chateau Marmont. The Chateau Marmont is a beautiful hotel in West Hollywood which overlooks Sunset Boulevard. It was built in 1929 and since then has been the playground to the rich and famous. Such celebrities as Montgomery Clift, Jim Morrison and Leonardo DiCaprio hve stayed there are comedian John Belushi died here in 1982 after a lethal cocktail of heroin and cocaine. I visited the Chateau Marmont in January of last year and was in complete awe of it's beauty and the place completely fascinates me. I'm a big fan of old Hollywood hotels, especially the Hollywood Roosevelt Hotel on Hollywood Boulevard.; The Roosevelt played host to the first Oscars in 1929 and, like the Chateau Marmont, has been played host to many celebrities over the years and their antics. Although the Roosevelt has been featured in many movies over the year, I am still waiting for a film to be about the Roosevelt. As Sofia Coppola quoted regarding the Chateau Marmont, "It was an essential element, the third (main) character of the film" (courtesy of Universal Studios, 2010). Next time I am in Hollywood I am going to take advantage of the Chateau Marmont's hospitality and stay a night or two there....if I can tear myself away from the charms of the Roosevelt Hotel.

Review
Sofia Coppola's "Somewhere" may seem like just a film about a Hollywood actor's life on the surface, but it is so much more than that. It is a film about the emotions which run through father and daughter relationships. The big thing to take into account before you see "Somewhere" is that you will take as much as you want to take out of the film. Take it for purely the words said on the screen and you take the images at face value, you won't see "Somewhere" for what it really is. If you see the words in each facial expression and see the symbolism in the script and visuals, you will see "Somewhere" as a masterpiece. Johnny Marco (Stephen Dorff) is a Hollywood actor enjoying the high life and living in the Chateau Marmont. He is drifting through his life with not much bother until his 11 year old daughter, Cleo's (Elle Fanning) visit becomes longer than intended and he realises that even though he has always been in Cleo's life, he hasn't been in her life as her father.

"Somewhere" shows modern day Hollywood in the most visually beautiful way in the past 10 years on the big screen. The cinematography and images are absolutely stunning. Scenes such as Johnny and Cleo's tea party under the water at the pool at the Chateau Marmont are just a treat to watch. Unlike Coppola's last film, "Marie Antoinette", it isn't beautiful in the way that it is overstocked with images of amazing ball gowns and cupcakes, but it is all in the way in which objects and people are filmed. Coppola manages to make even a scene where Johnny is getting a facial mask made beautiful. However, the scenes are very strung out and there is no suspense in the film at all. It feels as if not much really happens throughout the film, and this will really irritate some members of the audience.

The script is quite simple. Unlike other films of the subject matter, there are no long speeches in which feelings are described and how father and daughter want to become closer. The dialogue is all very simple and the images and actors facial expressions do all the talking. In hind sight, so much more could have been done with the screenplay and the script. The film has many directions in which it could have gone so it isn't surprising that if feels like it has been limited. Yet, if it had taken one of these directions, whose to say that it wouldn't have ended up being a cliche film and much like every other film out there where a dead beat father finally connects with his son or daughter. The film also gives great insight into the life of a single Hollywood actor these days. It isn't all glitz and glamour and it is all a game of filling in free time while waiting for their next call to duty, and that may well be with sex and drugs.

The acting in this film is extremely natural. For the most part, it doesn't seem as though Stephen Dorff and Elle Fanning are acting at all. Dorff is perfect as Johnny Marco, truly becoming his character. It is completely evident how Johny chnages throughout the film, and again not by the words spoken, but by Dorff's acting. Coppola requested Dorff herself for the role and the result is the best role he has played in well over 10 years. Fanning is a pure joy to watch on screen. She can seem a little too mature for an 11 year old at times (even though she is just shy of 13 years in real life) and at other times she presents the perfect amount of naivety and innocence for her role. Her best moment is when Johnny's overnight guest joins them for breakfast in the morning and the look she gives her father says a thousand words and would make anyone stop and question themselves. Coppola directs these two so well that it feels like you are just watching a home video for the majority of the film.

Some people will find "Somewhere" utterly frustrating due to the lack of tension, suspense and dialogue, while others will find it a complete work of art. Simply, those who see film as for purely entertainment, won't be overly impressed. Those who see film as a form of art as well as entertainment, will love and praise it. As a modern day work of art, "Somewhere" is truly a wonderful and beautiful construction.
8/10