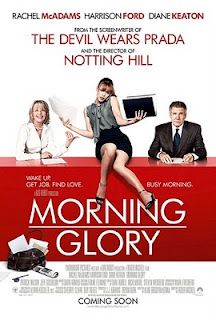 In My Own Words
I was starting to get worried about Rachel McAdams. I became a fan of her's when I watched "Mean Girls" for the first time. She was perfect as the perfect mean girl Regina. Then she did a 360 degree turn and appeared as the soft, beautiful, loving Allie in "The Notebook". It was like she had completely exploded onto the scene and eeveryone knew who this new girl was. She could play the good girl and the bad girl and do both well. Since her new found stardom back in 2004, she has only done 9 films in 6 years, which is unusual for a young, bright star as they try to strike while the iron is hot. However, in the last two films she went downhill. She tried her hand as Sherlock Holme's flame in 2009 in "Sherlock Holmes" as Irene Adler, but it wasn't her best choice of role. However, in her defense, she didn't get as much screen time as what she normally recieves so it wasn't as easy to make an impact. In 2009's "The Time Traveller's Wife", she once again played the young girl in love as Claire. Again, it was far from her best and there was nowhere near as much emotion in her performance as Ally. Was it the downfall of McAdams?

Thankfully, with the release of "Morning Glory", the answer is no. "Morning Glory" is McAdams first venture where she is the lead actor and is supported by Diane Keaton and Harrison Ford. She shines in the role as Becky. It is her most natural role to date and she can definately carry a film herself. With a smile like her's which light's up the screen, how can you not be happy for the Canadian born actress? Her next film is the Woody Allen directed film, "Midnight In Paris" with a talented cast of Martin Sheen (her rumoured new boyfriend), Adrien Brody, Kathy Bates and Marion Cotillard.

Review
It's been a long time coming, but in "Morning Glory", Rachel McAdams finaly gets her chance at being the first billed and lead star of a film. And she shines in her best and most relatable role in years. "Morning Glory" is a fun, light piece of entertainment which is refreshing and funny. It is not and not going to be included in the whitewash of Oscar buzz related films being released at this time, but this can be a good thing as you can watch the film and just relax. Becky Fuller (Rachel McAdams) has donated all her adulthood to her career in television production, specifically morning television. Her life comes to a halt when she is sacked from her job in New Jersey. Becky scores a job at New York televison station, IBS on their morning show, Daybreak. On her first day, she sacks the lead male anchor and decides she would like to hire long time news reporter, Mike Pomeroy (Harrison Ford) to co-host Daybreak with Colleen Peck (Diane Keaton). Working on Daybreak is a nightmare for Becky because of Mike's notorious bad attitude and failing ratings. When Becky is informed by boss, Jerry Barnes (Jeff Goldblum) that her show is in danger of being axed, she takes matters into her own hands and makes some changes.

"Morning Glory" starts off very blandly and for awhile doesn't look like it will amount to anything.The script is dull and lifeless and there are really no giggles. Yet, with the point in the film when Becky makes a change, the film also makes a change. Suddenly from that point in the film, it becomes a lot funnier and the script actually improves dramatically. When Becky starts to get weatherman Ernie Appleby ( Matt Malloy) and Colleen to do segments out of the ordinary, the movie becomes a lot more fun and the script becomes a lot wittier. Yet, there really is no suspense throughout the film and no feeling of real hope that Becky and her crew succeed. There is a real feeling of disconnection between the film and the audience and at no time do you forget that you are watching a film. This isn't completely unusual, but you don't become emotionally invested in the film at all. It is just a piece of enjoyable fluff entertainment.

Rachel McAdams is a natural in this film. She plays the role of Becky with complete ease and is extremely likable. Granted this isn't a very hard role to play, but she still does it to the best fo her ability and no one could have played the role as well as she did. This isn't Diane Keaton's best role, although she is very funny. It is completely obvious she is acting and isn't very natural this film, which is unusual because that has been one of her strong point in past movies. Harrison Ford is again quote dull in the first half of the film and he becomes a lot more interesting a character after the breakthrough. He is especially likable in the final television piece scene. However, the film makes it out that Mike and Becky have a special bond, which is extremely unbelivable as there certainly seems like there is absolutely no connection watching them. One would expect McAdams and Ford to have a father-daughter relationship, yet they have absolutely no on screen chemistry. Yes McAdams does give him teary eyed looks, but the way they interact is completely disconnected from each other.

"Morning Glory" is Rachel McAdams moment in the spotlight and she is just delightful. The film itself is light and fun and great entertainment for the family.
6.5/10