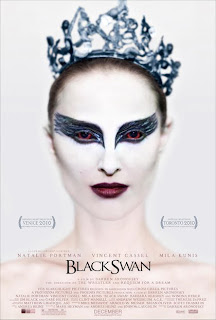 In My Own Words
"Black Swan" is one of those films I come out of and I have a million things to say about it. Whether I actually like the film or not, I do love a film which makes you talk and think. I think I will be thinking about "Black Swan" for awhile after seeing it today. My feet hurt just thinking about it.

Firstly, I know what you are all thinking. And yes, I do think that Natalie Portman will win the Academy Award for this film and I will tell you why. First and foremost, this is a powerhouse performance. As Nina Sayers, she gives the performance of her career thus far. She is truly amazing. For one to be amazing in a film, it has to be in a role which isn't easy. One can never be amazing in an easy role. Her commitment to this role is extraordinary. How much work both her and Mila Kunis put into learning and trying to perfect dancing which normally takes people their whole lives to perfect is commendable, as is how much weight they both lost. I'm impressed that Portman was able to get pregnant that soon after losing that much weight and being that skinny. And why else will she win? Because we all love it when someone who has been in the business for so long finally succeeds. Portman's been one of Hollywood's sweetheart's for years with never a bad word said about her in the press and going from child star to one of the beautiful women of film. So good on her, we all love an Oscar fairytale.

Besides the powerhouse that is Portman, there was something else that made my mind tick over after I saw the film. Portman's charcater, Nina completely loses herself in the character of the Black Swan so much that she starts to believe she is turning into the Black Swan. This is why I have such a love hate relationship with method acting. Method acting is a technique that is famously linked to the Lee Strasburg Theatre and Film Institute in New York where many actors go to study. Method acting is a way of enhancing one's dramatic performance by experiencing what your character is experiencing. Some famous method actors are Marlon Brando, Al Pacino, Robert De Niro and Angelina Jolie. All brilliant actors who have and had gained so much for their performances from method acting. We've seen many Oscars won by method actors.However, one can imagine how dangerous it can be at times. If you undertake a role where the character is disturbed, talented and committed method actors may tend to go slightly nuted themselves. The one actor who makes me worry about method acting was Heath Ledger. Before becoming the Joker in "The Dark Knight", Ledger locked himself away in a hotel room for 6 weeks making himself the Joker and using his diary as a way of expressing himself. The Joker is a deranged character and even though The Joker was the best role of Ledger's career, one can believe that The Joker may have played a role in his untimely death. Method acting, friend or foe?

These are my own words and this is my review

Review
"Black Swan" is much like it's lead character. On one hand it is beautiful, flawless and almost perfect, on the other hand it is completely disturbing, unsettling and dark. It is beautiful in a painful way. This film is definately not an easy watch and shows a side of ballet and dancing which, until now, no film maker has been game to put on screen. The brave and daring Darren Aronofsky, who obviously isn't afraid to show the dark side of occupations out of the ordinary as he did in "The Wrestler", is the best man for the job. It feels as in "Black Swan" reaches in and takes a strong hold of you from the beginning of the film and even when walking away after the film has finished it feels like the Black Swan is following you.Not only this, but it is terribly intriguing and a psychological thriller of a different kind. Nina Sayers (Natalie Portman) is only a sheltered little girl in the beginning, who is treated by her mother (Barbara Hershey) like a fairy princess ballerina. She completely shields her from the dark side of ballet which she knows exists, until she can no longer when Nina finds herself in the role of the Swan Queen in Swan Lake. Nina is the perfect White Swan with her innocence and romantic outlook on life, but she cannot master the seductive and scheming Black Swan. She finds herself becoming the Swan Queen, becoming both the extremes of the White Swan and the Black Swan.

"Black Swan" is a cinephiles dream. Every part of this film can be pulled apart and used as an example of what makes a film a great film. Firstly, the cinematography is extraordinary. It can leave you in awe of the beauty in the camera shots. The ballet and the close-ups of the feet of the dancers mid pirouette are just beautiful. However, it can also make your feel extremely uncomfortable and in pain, yet you cannot tear your eyes away from the screen. There is also so much symbolism in this film. Symbolism almost seems like a lost art in film. It is not often you see a film these days which the visuals represent something deeper. For example, Portman will always wear white in the first half of the film, and gradually wears more black to symbolise her being dragged over to the dark side and becoming more and more like the Black Swan. The character of Lily almost always wears black and has the tattoo of the Black Swan to symbolise her influence in Nina's demise. She is also symbolic of the disruption of the White Swan. Also notice how retiring dancer, Beth is never seen wearing anything bit dark colours as she has already drifted into the dark realms of the Black Swan.

This film is not for the faint hearted. It is not a film about ballet for little girls who hope to be the star of a dance company one day. It shows the ugly side of the world and does so in an extremely realistic way. It delves into parts of the world which people fail to see such as the physio and the unnatural things which ballet does to the body. While many people may find the film too confronting and uneasy to watch, it is a credit to the filmmakers that it is so emotionally taxing to the audience. The film is doing it's job by delving into your senses so you feel every physical pain Nina feels and feel uncomfortable as a result of so much confrontation. It is very much like Aronofsky's last film, "The Wrestler" where you are consistantly faced with emotinal and physical strain right from the first scene.

Also like "The Wrestler", "Black Swan" is extremely character driven and has one main character who is in every scene of the film. Not an easy task for any actor. Natalie Portman is the perfect woman for the job. One of Portman's trademarks is her smile, something we do not see much of in this film. It is an extremely hard part to play and a role which could only be completed well by one who has 100% commitment to the film and the character. Portman does this and is definately worthy of her recent Golden Globe win and quite possibly the Academy Award next month. You see her go from a fragile and naive little girl who just wants her dream to come true to a troubled and self destructive woman. Portman becomes NIna and just watching her on screen, you forget everything else she has ever done, she is the Swan Queen. Her acting is truly brilliant and her final scene is absolutely breath taking. Vincent Cassell is great to watch and is actually quite scary and unnerving. Winona Ryder is great as the "has been" Beth Macintyre. She is pathetic and like a car crash, you cannot take your eyes away from her. In her role as Lily, Mila Kunis is good but not wonderful. The role is not a hard one for her and it doesn't feel as if there is much acting being done. She does her role well, but it is not an overly originally written part. Barbara Hershey also does well as Nina's over protective and controlling mother.

Natalie Portman has always been a star, but "Black Swan" is the film that has established her place in the league of Hollywood stars who will never be forgotten. "Black Swan" is not what you would expect it to be in any way and is far from a walk in the park. A film lovers dream and a parent's worst nightmare.
8.5/10