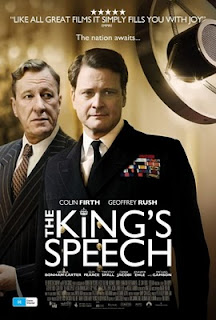 In My Own Words
Wow. No really...wow. I am still in absolute bewilderment nearly two hours after I walked out of the cinemas after seeing "The King's Speech". I have nothing but praise for this film and I truly believe that I have just seen the film that will win the big one at the Academy Awards in March and I have no doubt that I have also witnessed the performance that will win Best Performance By An Actor In A Leading Role. It was only one scene into the film that I realised when watching Colin Firth in his role as King George VI that I was witnessing something special. Halfway through the film, I whispered to my soon to be husband, "He is going to win the Oscar". I sincerely hope that "The Kings Speech" is also the source of the Best Supporting Male and Female Actor's too. Geoffrey Rush and Helena Bonham Carter were truly brilliant. I'm not usually one to make huge and confident predictions like this, but I feel like I have become so emotionally attached to this film that I will be absolutely devestated if victory is taken from it's grasp for the Golden Globes in the next few weeks and the Oscars in March.

The point about this film that I really want to make is that it is one of the most emotional films I have seen in a long time. Unlike the large majority of emotional films, this film does not contract the emotion from death or romantic angst, but rather from everyday human feelings show by an amazing man. I had tears in my eyes for the large part fo the film and found myself weeping in the final scene. I have never had this type of experience with a film that, as I said, does not have any death or hard core romance in it. Some of the tears were from feeling "Bertire's" pain and some of them were from the overwhelming feeling of seeing so many amazing things on the screen at once. I think I may break down in tears once again if Firth takes home the Oscar because I haven't seen a performance more deserving in a very long time.

I feel like this was the perfect time for me to be watching this film which is a great representation of an important time in British modern history as I will be visiting England for the first time in the next few weeks. I am extremely excited and seeing Westminster Abbey on the big screen has just heightened my excitement.

Review
It is a very rare occasion when a film comes along which can be described as near flawless, but when it does, it is a film and time to be cherished. "The King's Speech" is an extremely powerful and awe inspiring film. It does not have visual effects or crazy CGI images in which many films are these days measured by, it relies purely on the amazing performances by Colin Firth, Geoffrey Rush and Helena Bonham Carter and a brilliantly written screenplay to create an emotionally charged film which is almost completely character driven. The film opens with the Duke Of York (Colin Firth), affectionately known as Bertie by his family, giving a speech at Wimbeldon. As soon as he opens his mouth, realisation sets in that he has a bad stammer and is incapable of speaking in the same manner as others because of it. His wife, Elizabeth (Helena Bonham Carter) seeks out the help of Ausralian speech therapist, Lionel Logue (Geoffrey Rush) to help with her husbands problem after a series of failed attempts by advised psychiatrists. Although Bertie is cynical at first of Logue's methods, the most unlikely of friendships starts to form and Logue becomes an even more crucial part of his life when he becomes crowned King George VI.

This movie is an amazing story of real human emotion which can be felt by anyone, not just the King of England. There are millions of people out there who have problems with public speaking or have low self esteem because of one reason or another. This movie reaches out to those people and pulls on their emotional strings. It is extremely rare for a film which is based on a powerful and historical figure to become one which everyday people can relate to. This film would not be what it is without the amazing acting by the three lead's. This is very much a character driven film, which means that the acting had to be superb in order for it to be any sort of success. Tom Hooper certainly knew what he was doing when casting this film. Colin Firth is absolutely incredible as Bertie. He well and truly becomes the character and the audience becomes completely lost in the character to the point that you completely forget that this is Colin Firth you are watching. Gone is Mr Darcy and every speck of "Pride And Prejudice" and "Bridget Jones' Diary" which Firth used to project when he appeared on the screen, this man is the real deal. He shows the pain and embarassment he feels over his stammer right from the first sight of him on the big screen. He truly becomes the character right down to the smallest detail. Firth carries himself like royalty and his stammer brings tears to your eyes. He has indeed reached he pinnacle of his career, and there seems to be no real threat in sight for the Best Actor Oscar.

Geoffrey Rush is great as Logue. Unlike Firth, it is not the hardest role he has ever done, but he nevertheless is brilliant and extremely likable. Like Bertie, the audience feels pity for Logue. His character is extremely witty and funny. Helena Bonhom Carter is also brilliant as the future Queen mother. In this role which see's, for the first time in a long time, take on a film role which is not a quirky Tim Burton or Harry Potter role. It is not the first time she has played royalty ( as she was cast as Anne Boleyn in the TV movie "Henry VIII" in 2003), but it is defiantely her finest. She is sublime as Elizabeth and you can see the love she has for her husband and the pain she feels for him in his eyes. Timothy Spall was also brilliant as Winston Churchill, taking on the persona ansd mannerisms of the man to perfection.

The screenplay is brilliantly written. The reference for this film was the diaries which Lionel Logue left behind and these diaries were available to Hooper and and writer, David Seidler when putting together this film. The research which has gone into this film is just incredible. It is also quite funny in parts, such as when Bertie is learning how to swear, which is quite unusual for such an emotional drama film. The cinematography and musical score enhance every emotion throughout the film and create suspense and intrigue. The monologue of Bertie and Logue's therapy sessions is very clever and highly enjoyable.

In colnclusion only one thing can be said to sum up everything which "The King's Speech" is. The future best film of the 2011 Academy Awards, and that is no light statement.
10/10