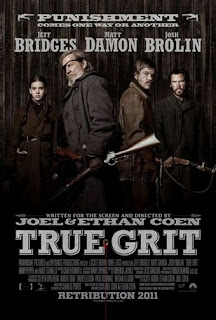 In My Own Words
Welcome to Movie Critical's first 2011 post Oscar nominations post! January and February are always the most exciting months for film because it is awards season! "True Grit" is one of the films in this award season that I have been waiting for in anticipation to be released. Reason being, it has cause for on big question in my mind. How could a film which has just recieved 10 Academy Award nominations have recieved no nominations at all at the Golden Globes? Absolutely none at all! "True Grit" is one of those films that had awards buzz about it from way before it was released. When the Golden Globe nominations got released and there was no sign of "True Grit", I decided in my own mind that it may not really be that good a film. Really naive and close-minded way of thinking I'll be the first to admit. I was still looking forward to seeing it regardless because the trailer made me very excited about it's release. So come 25th of January 5:30am, come the onslaught of "The Kings Speech"...and "True Grit".

So why did "True Grit" recieve no Golden Globe nominations? There isn't one reason, more a number of speculations. There is one speculation that "True Grit" wasn't screened for the Hollywood Foreign Press (HFP). Another speculation, is that the HFP isn't a fan of Joel and Ethan Coen. Personally, I don't know if this is the case. The Coen brothers have been around for awhile and this is their first film in quite awhile that hasn't been nominated for a Golden Globe. Yet, it is true that the Coen brothers are more popular at the Oscars than at the Golden Globes, but this is the first time the film has been snubbed completely. Or then there is the most obvious reason, maybe the HFP really just didn't enjoy "True Grit" It's unbelievable, but it could well be true. As they say, when there is a mystery, the most simple answer is normally the answer. The biggest mystery to me with all this, is how could they ignore Hailee Steinfeld's debut performance? And another question, could Steinfeld really be a contender for the Oscar even though she wasn't nominated at the Golden Globes? Of course she can, the Oscar's are a completely different ball game.

Review
In 1969, John Wayne won his first and only Academy Award for a film called "True Grit". 41 years later, it is Joel and Ethan Coen, the movie making brothers known for ignoring the norm and doing it well, who take on the remake of this western. While in 1969 it was Wayne who was the star of the film, in 2011 it is Hailee Steinfeld. Steinfeld, the 14 year old who in her first feature length film appearence has earned herself an Oscar nomination, is undoubtingly the scene stealer in this film. It is almost a mystery that she has been nominated for Best Supporting rather than Best Lead as she is in every scene and the story is being told through her eyes. Mattie Ross, played by Steinfeld, is out to avenge the death of her father by Tom Chaney (Josh Brolin) by bringing him to justice. She employs Rooster Cogburn (Jeff Bridges) to accompany her into Indian territory to track down Chaney. They are also accompanied by another bounty hunter in pursuit of Chaney, LeBoeuf (Matt Damon).

One of the best things about "True Grit" is that it is unlike other traditional westerns. It is an adventure and a drama, yet it is also a coming of age story. It is a disruption of innocence and naivety. Mattie is a smart talking 14 year old who believes she is powerful and strong enough to endure everything which is thrown at her. She believes she is the rock of her family now that her father has passed and holds back all her emotion when dealing with bounty hunters, sheriff's and even when faced with her father's corpse. She shows her naivety by believing that she is going on a "great adventure" when she will track down Chaney and he will come quietly. Steinfeld's Mattie is the star of the film and the film would not be as intriguing without her. She is perfectly cast in the role and it is a brilliant performance by one so young and inexperienced in the motion picture field.

Not to say that Steinfeld is the only good thing in the film, because that is far from the truth. The Coen brothers have once again put together a tight, intriguing film. "True Grit" is the best western to come out in years. The ending is one which won't be to everyone's liking. Many may feel as if it should end one scene earlier to make the ending a bit more interesting. The script is very well written with the appropriate wording for every scene, especially those for Mattie. The character development for Mattie is fantastic as you know exactly who she is, where she has come from and her personality as if you knew her personally, yet the character development for the three other main characters is minimal. You know something about each character, but not enough to know them in the same way you know Mattie. Jeff Bridges' Rooster is the other character besides her which has a significant amount of character to him. Although you do't know his character's background, he is still an extremely significant personality of the film. Bridges does a great job at carrying through the character with consistency from beginning to end. Not in the same class as his "Crazy Heart" performance, but still a notable one.

The cinematography in the film is also quite beautiful. There are some really amazing images of the snow falling in the woods and the filming of the plains, woods and old town are really quite exquisite. The capturing of the 1800's old western period is amazing and is perfection with every aspect from the sounds and feelings which the visuals create, to the fine period clothing. The musical score is also wonderful. A musical score which send shivers up your spine is definately a commendable one.