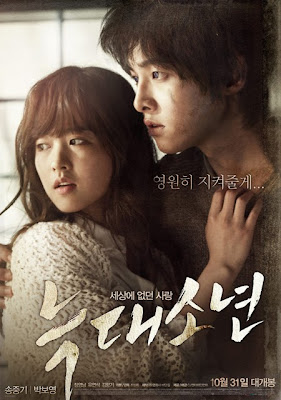 A Werewolf Boy is the official opening film for the Korean Film Festival in Australia 2013. Screened in Brisbane on the 14th August and Sydney on the 21st August. Screening in Melbourne on the 5th September. Please see here official site for tickets and venue details.

A Werewolf Boy was also screened at this year's Melbourne International Film Festival and screened on the 3rd and 11th August.

As the top grossing melodrama at the Korean box office of all time, A Werewolf Boy has something for everyone.

One wouldn't suspect it by just reading the title of the film, but A Werewolf Boy is so incredibly sweet and beautiful. It turns a stereotypically horror associated character into a lovable and misunderstood soul who craves love and friendship. The film has a bit of everything in it with plenty of laughs, tear-jerker moments and despite it's light content for the most part, you can't have a film about a werewolf without having a few scary moments.

47 years ago, a young girl, Suni (Park Bo-Young) and her family move into a farmhouse to make a new start. They soon discover that there is a feral boy (Song Joong-Ki) living on their property. They take in the boy, who's behaviour is more like a wolf or dog than a boy, and rename him Chul-Soo. Suni and Chul-Soo share a very special bond as the two become best friends and each other's first love. When neighbours start to find out what Chul-Soo really is, it puts him in real danger and will break both his and Suni's hearts. 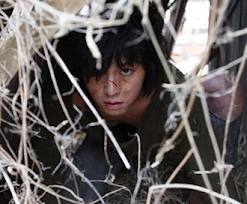 A Werewolf Boy is a beautiful breath of fresh air in cinema. This genre hybrid is unlike any other teen romance film where a human falls in love with a supernatural creature. The big difference here is that unique beauty really is present in the relationship between Suni and Chul-Soo. Neither of them speak the same language as each other, but they both come to understand each other and do not want to be without the other. There is no love at first sight, but rather the progress of a relationship which is based on respect and friendship. There is also so much beauty in the innocence of the friendship between Suni and Chul-Soo, as well as in all the scenes with the younger children of the village. It is so well done how the script allows us to see how children are more accepting of those who are different and can sense when there is good in the difference.

Although the story does come completely equipped with the promise of it being not completely realistic, the ending of the film starts to makes it seem a bit more like a fairytale. The ending really is a matter of personal taste and opinion as to whether you will appreciate it. It seems a highly unlikely outcome and also one which doesn't really quite add up. It is still a sweet ending nevertheless.

A Werewolf Boy is also visually beautiful. The countryside in which the farmhouse is located in beautiful and in the snow this beauty is amplified. 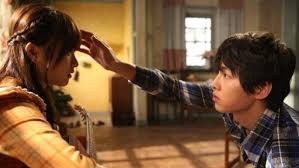 Park Bo-Young is absolutely wonderful in this film. She is such a beautiful and relatable character. You see her character change throughout the film and one of her last scenes in the film in which she is in the woods, she is just sublime and absolutely heartbreaking in. Song Joong-Ki is also wonderful. Whilst many people may think that acting like a dog for the majority of the film may be an easy task, he proves this isn't the case. His Chul-Soo is an extremely complex character, as he changes so much throughout the film and his change needs to be shown gradually and convincingly. His mannerisms are spot on for the part he is playing and after establishing that he is not the scary monster people think he is, he is the object of the audience's affection.

A Werewolf Boy is truly a film for everyone, in a way that is so rare these days. It is a treat to see something so different get it right and be a thing of true beauty.


The Korean Film Festival in Australia will be in these cities on the following dates:
Brisbane      14th-18th August
Sydney         21st-29th August
Melbourne  5th-11th September