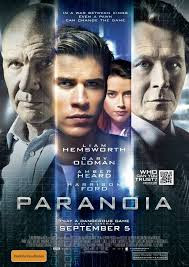 Paranoia will open in Australian cinemas on the 5th of September 2013 and is distributed by Icon Films.
Opens in the United States on the 16th of August 2013.

Paranoia is what one would call a run of the mill thriller. It's got everything a typical thriller has, which is it's main failing point. It is absolutely nothing new as it just tries too hard to be like it's peers.

The type of film which you can tell would have looked a lot better on paper than it does on screen, Paranoia is a lack-lustre and unoriginal film with equally lack-lustre and unoriginal characters. There are some interesting enough twists, but none that are mind blowing enough to make the film a success. It's tries so hard to be a coming of age thriller, but it just seems confused as to whether it is a young adult film or whether it is a grown up film.

Adam Cassidy (Liam Hemsworth) is a twenty-seven year old entry level employee who feels like he is on the brink of his career breakthrough, when he and his friends are fired when he challenges his billionaire boss, Nicholas Wyatt (Gary Oldman) and then uses his credit card on a boozy night out. Rather than pressing charges against Adam, Wyatt gives him the opportunity to earn more money than he ever thought possible and allow his friends to get their old jobs back by going undercover at Wyatt's archenemy's, Jock Goddard's company and gathering his secrets. What begins as an amazing opportunity for Adam to experience how the other half lives, becomes a dangerous game in which Adam must fight for his life and the lives of those he loves. 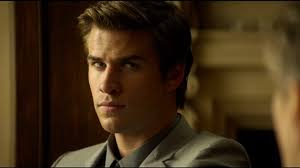 It is easy to see how the screenplay, written by Jason Hall and Barry L. Levy and based on the novel by Joseph Finder would have looked like a winner on paper. The twists are all there and are quite unpredictable. Yet, on screen it just doesn't seem to work. Paranoia gives us nothing new that we haven't seen before. Besides the twists, nothing about this story allows it to be an original thriller movie.

What Paranoia tries to do is make a coming of age story into a thriller, which doesn't sound bad at all in theory. It is Robert Luketic's direction that just overcomplicates it. Liam Hemsworth's Adam Cassidy does definitely grow and change throughout the film, but he and his friends still seem like they are college students in an internship program throughout the whole film. The loud music supplied by Junkie XL makes the film feel more like a dance party at times than a serious tale of danger. Therefore, Paranoia seems like it is just a little too old some the younger audience, while it is just a little too young for the older audience.

Liam Hemsworth is not a convincing lead in this film. This is nothing against Hemsworth or his acting ability, but rather the way he is used in the film. His character of Adam Cassidy is not a particularly likable character to begin with, but doesn't redeem himself during the course of the film to the point where the audience starts to connect with him or barrack for him. He starts off as just plain arrogant and ungrateful and although he seems to have lost this by the end of the film, he hasn't picked up the qualities that would make him endearing to the audience. Hemsworth does seem to have the acting potential to be greater than what he has given here, but it is a shame he wasn't allowed to use his full potential in this film.

The chemistry between Hemsworth and Amber Heard is terrible, and again, this is not the fault of either of the actors. The two sleep together once, bicker back and forwards for awhile, sleep together again and then all of a sudden have some deep emotional and romantic connection. There is no indication that they are a couple who care deeply for each other before they start talking about meeting parents. They say the words that two people who have fallen for each other would say, but there is no chemistry or actions to back this up. Luketic seemed to be more interested in showing a montage of their bedroom activity rather than on actually emotions which are apparently there. 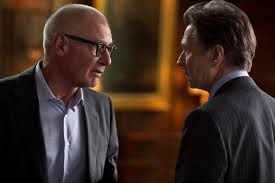 Perhaps the best part of the film is watching Gary Oldman and Harrison Ford argue amongst themselves. Again, it doesn't seem like a particularly fiery feud when they are in the same room until the end of the film, but when it does it is worth waiting for. Oldman and Ford are perhaps the two best things about the film, with Richard Dreyfuss, who plays Adam's father, not far behind.

While some films can afford to be not entirely original as they can redeem themselves in other ways, Paranoia just doesn't. It's characters and their players seem hard done by in the way in which they were presented on screen and lead to this film being just a bit of a mess. Although it may just be interesting enough to encourage you to read Joseph Finder's novel.


You may have also seen Gary Oldman in....
The Dark Knight Rises as Commissioner Gordon