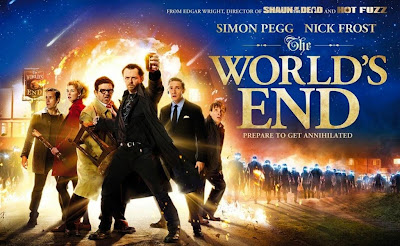 The Three Colours Cornetto Trilogy comes to a close in spectacular fashion with The World's End.

The World's End is British comedy at it's best. When things become slightly ridiculous in the film, the comedy just keeps coming with another very funny and witty script by Edgar Wright and Simon Pegg. Whether you have watched the first two films in the trilogy, Shaun of the Dead and Hot Fuzz or not, you can enjoy this film, but having watched the first two would give you the privilege of understanding some of the subtle and amusing recurrences of the films. 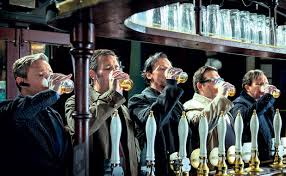 On the last day of high school back in 1990 in the English village of Newton Haven, Gary King (Simon Pegg), Oliver (Martin Freeman), Andy (Nick Frost), Peter (Eddie Marsan) and Steven (Paddy Considine) decide to go on a pub crawl of the 12 pubs in town. As they do not end up being able to finish the crawl, Gary, who is still greatly living in the past, convinces all of the now grown men to give it another go. They arrive back to their home town and nothing will stop Gary reaching the final pub, The World's End. Even the end of the world itself.

The Three Colours Cornetto Trilogy of films by Edgar Wright and Simon Pegg (which got it's name from the presence of a different flavour/colour Cornetto in each of the films and is a comedic ode to the French Three Colours trilogy) are not a trilogy in the traditional sense, as they are a set of films which have their team in common and a few recurring themes, but no interconnecting storyline or characters. So the great thing about this is that you don't need to have watched either of the first two films in order to enjoy it. However, if you haven't seen the first two, you may notice when in the cinema that some people may be laughing a lot more than you when a certain person appears on the screen or in moments when something which means nothing to you happens.

The dialogue of the film is wonderfully hilarious. It certainly helps that all the characters have such great chemistry together that they are able to bounce off each other in their hilarious conversations. The final scene with Gary, Andy and Steven is such an intelligent piece of comedy writing especially.The story of this group of guys on an epic pub crawl and their story which encompasses a great deal of character development is great fun. However, it is the apocalypse core of the story which starts to make the film seem a little ridiculous. Let's face it, there is a tidal wave of apocalyptic films at the moment and the majority of the causes of the apocalypse are unrealistic. The blue-blooded robotic apocalypse in The World's End is not just farfetched, but it just comes off being ridiculous. You could argue that it is the end of the world and it is allowed to be farfetched if it is in a comedy film, but it just crosses the line between random and being a little too random. Luckily, the comedy continues around this undoing of the human race and while the actual apocalyptic visuals make the film askew, the wonderful dialogue keeps flowing and does not turn from hilarity to stupidity.

Simon Pegg has no problem being the lead man when it comes to his films. In his black attire and condescending, sarcastic dialogue at times he could well be channelling Adrian Edmondson's Vyvyan from "The Young Ones", but that is no problem because it is perfect for his character of Gary King who is dying to relive the glory of his younger years. Pegg has the ability to give an incredibly emotional and charismatic performance which you have to see past his comedy for, and this is another film he has been able to do that in. Nick Frost is also very good and a great character in this film. He and Pegg show once again why they are such an effective duo on the big screen.

The World's End is one for anyone who loves a laugh and a British pub.

You may have also seen Simon Pegg in......
Paul as Graeme
Star Trek Into Darkness as Scotty