Amour is as tragic and heartbreaking as it is hauntingly beautiful.

Michael Haneke has provided every ingredient in order to create an absolute masterpiece with Amour. The film completely emotionally captivates it's audience from beginning to end with absolutely astounding performances and beautiful direction.

Georges (Jean-Louis Trintignant) and Anne (Emmanuelle Riva) are a married couple in their eighties who are retired music teachers living in Paris. Life is seemingly peaceful and idyllic, until the day that Anne suffers a stroke which leaves her paralysed down one side. As Anne's physical and mental health rapidly deteriorates, the couple's bond is tested and their relationship changes it's course. 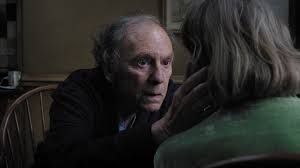 Amour is a heartbreaking reminder of our own mortality and  what happens to the relationships around us as the end approaches in such a way that is seen in this film. The film can be very emotional to watch as it progresses, but it rewards you at the end with a beautiful and fitting ending. It is the type of ending which makes you uncomfortable before almost straight away making you feel at peace yourself.

Even though the beginning of the film gives you the final outcome of the film, it still avoids predictability by not giving away how it will come to that finale and engrosses you completely regardless of whether you know the ending or not. The script, also written by Michael Haneke, is just beautiful as it shows how hard you have to work at a marriage whether it be in your first days as husband and wife or your last. It brings forth the worries that a couple will always have no matter how old they are, but also the little things that make a marriage work such as a sense of humour and playfulness, as well as common interests (which is music in this case).

Haneke's direction is just exquisite. The majority of Amour involves only two people and is set almost completely inside their apartment. Haneke makes sure throughout the film that the rooms of the apartment and the way in which they are seen on film fits the mood of the scene which they are in. He uses different lighting in the chosen room in each scene it is ion and each time you see a particular room, it isn't in the same circumstance and therefore has a completely different feel to it. Like the ending, the apartment seems to be it's most peaceful right at the end. 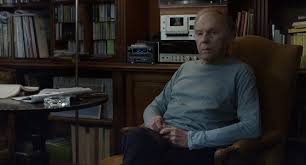 There could not be enough praise given to Jean-Louis Trintignant and Emmanuelle Riva. Trintignant is wonderful as Georges. It is incredible to watch how his character changes with Anne's change in health. He starts off such a strong personality as seen when he and Anne are talking at the beginning, but he begins to wear out bit by bit and even when he is trying to stand up to one of Anne's nurses, he is just too tired to make himself seem threatening.

Emmanuelle Riva is just astonishing. She commands the audience's sympathy and you feel all of her frustration and sadness. Although the state of her body is deteriorating, it is her expressions that give away how worn out her soul is getting as the end draws near. 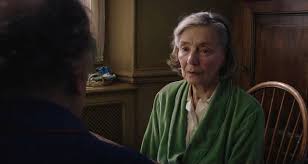 There is one stunning quote in Amour that stays with you. When looking through a photo album, Anne says "Isn't it beautiful?" to which Georges replies "What?", and she says "Life".

This is such an incredible line and is what we should all take away from seeing such a beautiful film that reminds you of the beauty there is in our existence.


On a side note.....
Amour was the only film nominated for Best Picture at the Academy Awards earlier this year that Movie Critical was not able to review before the awards. With this review, all nine nominees for the category have now been reviewed. The other eight nominees were:-
Argo (Best Picture winner)
Beasts Of The Southern Wild
Django Unchained
Les Miserables
Life Of Pi
Lincoln
Silver Linings Playbook
Zero Dark Thirty

You may also like to check out our wrap up of the week that we were in Hollywood for the Oscars here. Movie Critical will be back in Hollywood for the week of the Academy Awards in 2014 and will be reviewing all the films to be nominated leading up to the event.
Posted by NP1982 at 4:25 AM