Gimme The Loot gives an insight into the less glamorous face of New York while telling a glistening story about two young people trying to find their way.

In a time where many films fail to make character development one of their priorities, Gimme The Loot makes us feel as though we have known these two teenagers and have seen them grow for years rather than an 80 minute time period. It allows a unique look into the raw, urban side of New York City which we don't normally see on the big screen in a wonderfully directed and written film by Adam Leon.

Two teen graffiti artists, Sofia (Tashiana Washington) and Malcolm (Ty Hickson) hatch a plan to get revenge on a rival graffiti gang who have buffed their latest work. The two decide that they are going to tag the New York Mets Home Run Apple in their baseball stadium. In order to do so, they need to obtain $500 as quickly as possible over a summer weekend in New York. It's a weekend which will see them grow and learn about life, respect and trust.

Straight off the bat, Gimme The Loot is an exceptionally rare and unique film. It is unpredictable, incredibly creative and captivating from beginning to end. However, the film  is not suspenseful, emotional or exceptionally confronting, but neither is it supposed to be. The perfect slogan for this film is that it is all about the journey, not the destination, as watching how these two characters learn from this quest is just great fun. These two are streetwise and have speak with colourful, witty and often very funny dialogue.

Wonderfully directed by Leon, the streets if the Bronx are brought to life and the audience immediately becomes familiar with how it would feel to be on these streets. The landscape of the Bronx is harsh, yet so very interesting to see with it's street stalls and water towers. The soundtrack is absolutely perfect for the film and most enjoyable. 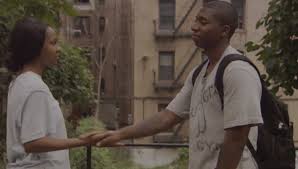 Tashiana Washington and Ty Hickson have an incredible amount of chemistry on screen. Their truly platonic relationship changes throughout the film as the two gain respect for each other and themselves in a way they didn't have to begin with. Their ease of  conversation and continuous banter is humorous and enjoyable to listen to. The two seem so natural in their roles, especially Washington who makes Sofia such a strong character with evident soft undertones.

Gimme The Loot is an enjoyable film which many bigger budget films could learn about creating true characters from.


Gimme The Loot is the 2012 winner of the SXSW Film Festival and Adam Leon won the title of Someone To Watch at the 2013 Independent Spirit Awards. Also Official Selection at the 2013 Cannes Film Festival.

The 2013 Possible Worlds Festival of American & Canadian Cinema will be running in Sydney from the 8th-18th August at Dendy Opera Quays and Newtown. Please see the official site for more information.

On a side note.....
For those of us who are not New York Mets fans or live in New York or the USA, I had to find out more about this apple that rises up when the team hits a home run. I was sure it didn't look as strange as what it sounded during the film.

I have actually been to see the New York Mets play once when I was in New York back in 2008, but alas, nobody hit a home run so I was unable to witness this apple rising up. So I asked my friends who are big Mets supporters and attend many of the games and they were able to help me out with my apple enquiries.

It made a great deal more sense when I learnt a bit more about it. Of course, the apple is a symbol of New York being "The Big Apple". The original apple which was at Shea Stadium was moved when the Mets changed grounds to Citi Field Stadium and now sits out the front. Please see this article at Gothamist website for a look at where the original apple now sits, and here is a YouTube clip of the old apple in action!


Thannkyou to my friends and New York Mets fans Michael and Hanna Thompson for their help with this article.
Posted by NP1982 at 11:25 PM