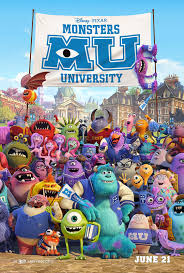 Twelve years on from when we first met Mike and Sully in Monsters Inc., we take a step back in time to when these two lovable monsters first became best friends at university.

If you are expecting Monsters University to be the same sort of film as Monsters Inc., it isn't that. As a sequel, it isn't as good as the first film, which is what one would have been expecting anyway. However, it is a very different film with not as much feeling and heart, but still has the focus on friendship and will make anyone reminiscent of their college days.

Mike Wazowski (Billy Crystal) has been dreaming of attending Monsters University to study to be a scarer all his life and finally his time has arrived. When he arrives, he is faced with the same doubt he has been receiving all his life about how scary he actually is by his classmates and superiors including natural scarer, James "Sully" Sullivan (John Goodman). Mike is an outcast in his school of monsters, but when he and Sully are kicked out of the Scarers program by Dean Hardscrabble (Helen Mirren), the two join take part in the Scarers Games in order to win a wager to get back into the program. They join forces with a group of misfits to make sure their dreams stay alive. 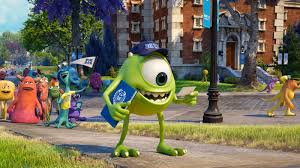 Monsters University is an entertaining film for the most part. It takes awhile to get going, but finds it's momentum in the latter half of the Scarer Games. The world of the Monsters University is well created and a lot of fun. Disney Pixar films are always a joy to watch and this film is no exception. It is visually perfect and the use of colour is brilliant.

While Monsters Inc. was suited for all ages including little children, Monsters University is not quite as suitable for this age bracket. Children may not be able to relate as much to seeing Mike and Sully go to university as they are not familiar with college days as of yet, but they will still enjoy seeing the children later in the film. Those who have been to college will enjoy all the clever parallels that the university in the film has with the actual college experience. There is college football, Welcome Week fair's, frat parties and, of course, lectures and exams. 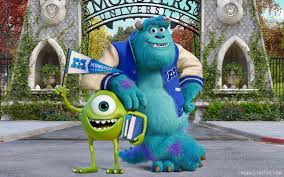 While the actual content may not be relatable for children, the characters are always relatable. There is every type of person you would find in not just college, but in every year of school itself. There are the jocks, the sorority girls, the arty types and the outcasts who are all on the outer of the cool kids for different reasons.

One thing that Monsters University is not is cliché. This is almost a refreshing change to many Disney animated films, yet it is at the same time confusing and a tad unsettling. The lesson you feel you are supposed to be learning is a harsh one regarding dreams that come true and dreams that don't. Some people will enjoy something different from a Disney film, but other people would much rather feel the Disney magic the way they feel it should be. There isn't a great deal of emotion to be felt throughout the film, which is something that is greatly missed. Monsters University is nowhere near as heartfelt as what Monsters Inc. was. Even as a stand alone film, it feels like you should be feeling the same disappointment as the characters and feeling sympathy for them, but it just isn't there.

The screenplay is still well written, but has the obstacle that being a prequel, it was always going to be slightly predictable as to where the best friends end up. However, this is dealt with well and has a few little surprises along the way. 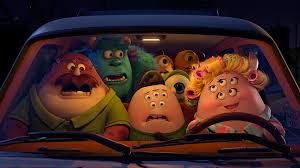 Billy Crystal and John Goodman bring back to life Mike and Sully extremely well. They are both fine voice actors as they allow their voices to morph into their characters. Helen Mirren is also great and quite chilling as Dean Hardscrabble. Steve Buscemi's Randy doesn't have as big a role as in Monsters Inc., but still puts in a great vocal performance in his time.

Monsters University seems to be slightly confused about what it is. It's college related content suggests that older children and adults may be able to relate to the film better than small children, yet the film itself can be a little too slow to be thoroughly engrossing for older audiences. Still entertaining, but not overwhelming.


You may have also seen John Goodman in....
The Artist as Al Zimmer
Argo as John Chambers

You may have also seen Helen Mirren in.....
The Last Station as Sofya Tolstoy
Hitchcock as Alma Reville
Posted by NP1982 at 5:47 AM