It's official! Vampire Academy: Blood Sisters is currently in production!

For those who are not familiar with the book series written by Richelle mead, Vampire Academy is not your typical vampire story. We're not talking a typical Twilight style, young adult romance here. Think more along the lines of Harry Potter meets Underworld. Yes, there is a splash of romance here, but teenage angst is far removed from the picture. The lead character, Rose Hathaway is one tough cookie and as a Dhampir, she is a bodyguard to her best friend, Lissa who is a vampire princess. Rose, as opposed to many other female leads in YA romance these days, is the one young girls should be looking up to. She is the one who puts herself between her best friend and danger and never backs down from what she believes in.

Vampire Academy: Blood Sisters currently has a 14th February 2014 release date in place (subject to change). Mark Waters, of Mean Girls, Mr Popper's Penguins and Freaky Friday fame, is directing the film and an impressive cast has been assembled including Gabriel Byrne, Olga Kurylenko, Joely Richardson and Sarah Myland. The lucky girls who have landed the roles themselves the lead roles are Lucy Fry, who is to play Lissa, and Zoey Deutch, who is Rose Hathaway.

So in preparation for Vampire Academy, Zoey Deutch is our Rising Star for July 2013. 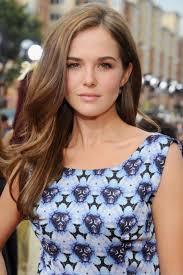 Deutch is no stranger to show business and acting runs in her blood, as she is the daughter of actress, Lea Thompson and director, Howard Deutch. Born in Los Angeles, California on the 10th of November 1994, she studied dancing from a young age and attended Los Angeles County High School for the Arts with a double major in Theater and Visual Arts.

Her break came when she appeared in "The Suite Life On Deck" in 2010 and became an instant Disney channel favourite as Maya Bennett. She made her film debut at age 16 when she played her real life mother's daughter in Mayor Cupcake. She also has had small roles in "NCIS: Naval Criminal Investigation Service", "Criminal Minds" and had an ongoing role as Juliet Martin in "Ringer" alongside Sarah Michelle Gellar).

Most recently, many people will remember Deutch from the 2013 film, Beautiful Creatures where she played Emily Asher, the most popular girl in school at Gaitlin. Deutch was a joy to watch in Beautiful Creatures, and over-shadowed many of her co-stars when on screen with her Christian morals conflicting her jealousy of the new girl, making her a very interesting character to watch.

Deutch is currently in the United Kingdom filming Vampire Academy, but when she is at home in the states, she is an active supporter of many charities including the Corazon De Vida Orphanage in Tijuana and The Alzheimer's Association. Her greatest love is her cat named Stinky Pete, who is outnumbered by having six dogs, as well as an African Grey parrot, several horse and a pond of fish to share his space with!


Check out this interview with Zoey Deutch and her Beautiful Creatures co-star, Thomas Mann.

We wish Zoey the best of luck and we can't wait to see her in Vampire Academy: Blood Sisters!