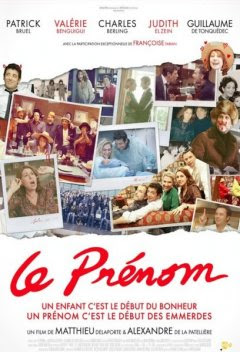 Year: 2012
Director: Alexandre de la Pattelliere and Matthieu Delaporte
Cast: Patrick Bruel, Valerie Benguigui, Charles Berling, Guillaume de Tonquedec, Judith El Zein
Le Prenom (What's In A Name?) will be released and distributed by Madman in Australia on the 25th of July 2013
What's In A Name? is an incredibly intelligent film based purely on character and dialogue.
Alexandre de la Patteliere and Matthieu Delaporte's latest starts off as one film, but ends as another. What's In A Name? begins as a clever and enjoyable comedy and stems into a French version of Who's Afraid Of Virginia Woolf? with some intense arguments that will seems all to familiar to some couples and families.

Married couple, Elisabeth (Valerie Benguigui) and Pierre (Charles Berling) host a small dinner party for their lifelong friend, Claude (Guillaume de Tonquedec) and Elisabeth's brother, Vincent (Patrick Bruel) and his pregnant wife, Anna (Judith El Zein). All seems to be going swimmingly until Vincent announces the name he will be giving to his son, there seems to be no one in the room who shares his enthusiasm. What ensues is a night full of confrontations regarding everything  these people have been keeping to themselves regarding each other.
The film of What's In A Name? is based on the play by Matthieu Delaporte, who also co-directed and wrote the adaptation. So as a result, you would expect the screenplay to be wonderful, and that it is. The dialogue is extremely witty, intelligent and enjoyable. It is extremely well done how the film just flows through the night without any sudden hold ups in the film. It is also not predictable at all, especially when it comes to Claude's confession which is the funniest part of the second half of the film.
In saying that, up until the point where Anna enters the film, What's In A Name? is a very funny and sweet film. When Anna enters the film, it all turns rather nasty. It actually becomes quite uncomfortable watching this family turn on each other and the characters you were actually really enjoying watching to begin with, you start to dislike intensely. The perfect example is the character of Elisabeth. To begin with she seems relatable and so realistic, yet as the film goes on she starts to seem nothing less of spiteful and incredibly mean. The funny thing is, this revelation makes the character who you initially didn't like seem like the good guy by the end of the film. It is quite a thing of genius to be able to switch the sympathy between characters like that. While the script is still almost flawless in the second half of the film, this half is the less enjoyable of the two.

The first five minutes of the film would be wonderful for French viewers who don't need to read subtitles, but for those who do not speak the language of the film, it is actually quite annoying. What's In A Name? has an Amelie type beginning where the characters are introduced in a montage which highlights their key characteristics and before that, has a montage of the path a pizza delivery man take to the apartment where all this is going to take place. The trip to the apartment is a beautiful montage of Paris and all it's glory. However, if you are not watching this in French, you are missing the beautiful visuals and the visuals that accompany the character's as you are trying to read the subtitles. The shots in the montage are way too quick and if you blink or read a subtitle, you miss it.
It is the men in What's In A Name? who steal the limelight. Patrick Bruel, Charles Berling and Guillaume de Tonquedec are all fantastic to watch and do not miss a beat through the film. They all have great comedic timing, but all have a great deal of individual character. Valerie Benguigui is good, but, as said before, she has the stigma of being such an unlikable character by the end.
What's In A Name? is very intelligent film and the first half is so much fun. Maybe it would have been better as a short film if you are after a light hearted comedy, but it works well as a feature film if you want a laugh, but also want to be challenged.
6.5/10
﻿