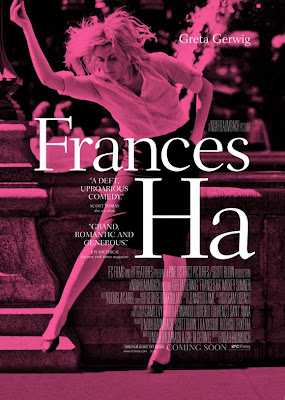 Frances Ha opens in Australian cinemas on the 15th of August 2013 and is distributed by Transmission Films.

Frances Ha is a charming tale of one girl's quarter life crisis in motion.

There is something so magical about Frances Ha. It almost feels like a New York fairy tale, yet there is nothing to suggest that it is so besides the charmed feeling you get after you have seen it. However, it is also harshly real and will strike a chord with many twenty-somethings who are experiencing what Frances is in the film.

Frances (Great Gerwig) and Sophie (Mickey Sumner) and two best friends in their late twenties living in Brooklyn. In Frances' words, they are the same person with different hair, as they both have big dreams but lack the motivation to make those dreams happen when they are just enjoying being alive. When Sophie breaks the news to Frances that she is moving out and starts becoming a real adult, Frances starts to realise that she isn't quite an adult herself at 27 with no real job and is seemingly "undateable".

Frances Ha is a completely relatable film for the twenty-somethings of today who are trying to find their way in the world. For those who are, it is quite confronting to watch at times as there are many qualities in Frances that people can relate to. At the beginning of the film, Frances seems like the type of person we would all love to be like. She seems so free and in love with love as she enjoys the simple of pleasures of pretend fighting in the park, dancing like no one is watching and laughs with her best friend over the simplest things. However, as the film goes on, you worry and become embarrassed about the decisions she is making and the place where she could end up as a result. It will definitely hit those who are in a similar situation hard, but does provide a generous ending to show that the storm passes. It is a real coming of age film for the older young generation.

The screenplay, written by director Noah Baumbach and star Greta Gerwig, is wonderful. The dialogue is just divine and so real, but the best thing about the film is that so much is told without the use of dialogue. Not once does Frances actually talk about the inner turmoil she is going through, but you can tell exactly the way she is feeling. She learns so much from what is going on around her both in her own situation and other peoples situations, but the beauty of it is that even though her character is so upbeat, you can tell what is going on in her head and how torn she is feeling.

The film has been likened to earlier Woody Allen films as New York itself is a living, breathing character in the film. The choice to film the movie in it's entirety in black and white adds to the charm of the city. It is enough to make or rekindle anyone's love for the city. The soundtrack for the film is also perfectly fitting. David Bowie's "Modern Love" is the perfect theme song for the character of Frances and adds to the brilliance of the continuity in the scene where Frances is running down the streets of New York dancing. The cinematography and editing of the film is also wonderful.

Greta Gerwig is incredible. This movie has absolutely been her moment to shine. Not only has she co-written this film, but she is so charismatic as Frances. She makes the audience become her friend with her likability and takes them on her journey with her. Although the character can almost become irritating with how she doesn't want to seem to help herself at times, you still want her to succeed and be happy. There is so much character development and growth throughout the film and Gerwig completely personifies this. In a film where so much if unspoken, she does incredibly well to allow everyone to see how she is feeling in the most subtle fashion. Mickey Sumner also does well as Sophie, but it is Gerwig who is the star and scene stealer.

Frances Ha is a film which many people can relate to and is confronting in the most subtle way. Sweet, sad and uplifting.