Year: 2013
Director: Evan Goldberg and Seth Rogan
Cast: Jay Baruchel, Seth Rogan, James Franco, Jonah Hill, Craig Robinson, Danny McBride, Emma Watson, Michael Cera
This Is The End is currently screening in the USA and the UK
To be released in Australia on the 18th July 2013

With warnings like this, you may be a little concerned and cautious about the viewing of This Is the End you are planning. The poster doesn't lie, they are all there, but the movie doesn't lose it's hilarity in it's warned content. This Is the End is one of the funniest films of the year and is one of those rare comedy films that come along every so often that have longevity and staying power. 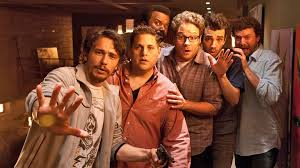 This Is The End isn't your typical film for any of the A-list celebrities involved. Instead of pretending to be someone else, they are all playing themselves. Jay Baruchel and Seth Rogan decide to go to a party at James Franco's house where everyone who is anyone is. During the wild party, chaos erupts outside in a fashion which indicates that this may well be the end of the world. Together, Jay, Seth, James, Jonah Hill, Craig Robinson and Danny McBride must find a way to survive and work together.

This is one funny film. It is able to conquer the audiences who love comedy, but are not fans of crude and gruesome comedy. This Is The End has these things, but has so much comedic power that it makes you almost believe that it needs to have it's crude moments and that they are completely relevant. The script, written by directors Evan Goldberg and Seth Rogan, is just wonderful and contains many great ad-libbed one liners.Although there are so many films in recent history regarding the end of the world, this one is completely unlike any other. It's not a common thing to be able to laugh at the concept of the end of the world. 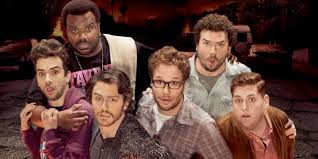 There is nothing really serious about this film, it is a comedy in every way possible. There are some biblical references regarding Revelations and the apocalypse, but that is as far as it will get. The "dramatic" moments of the film are just so overdone that you know that the film makers are trying to achieve laughs rather than critical success. There is also some dodgy and a little B-grade CGI, but you can only assume that the CGI was never meant to be world class and a little B-gradeness just makes it a bit funnier.

The brilliance of this film is that everyone is making fun of themselves. All the male actors are poking fun at themselves throughout the film in several different ways, including Franco's movie memorabilia collection and his art collection and Hill overplaying the sensitive role which he has often been cast in. There are cameos throughout the film, especially in Franco's house party, but stay until the end of the film for one of the most hilarious endings you will see in a film. Completely overdone, but completely fitting and hysterically funny.

All the actors in the film do so well. Baruchel, Rogan, Franco, Hill and Robinson all do well and remain likable throughout the film. Perhaps Hill stops being actually likable at one point, but is still hilarious. Danny McBride can become annoying at times, but that is his role in the film. It is hilarious seeing Emma Watson drop the F-bomb for the first time in her film career. She is a great touch to a predominantly male movie. You can't help watching This Is The End thinking how much fun this film would really have been to make.

It is incredible what Goldberg and Rogan have achieved with This Is The End. A concept that could just sound silly has given birth to comedic brilliance.