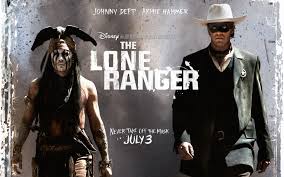 Not much good has been said about  Disney's The Lone Ranger since it has been released.

Straight off the bat, the expectations for The Lone Ranger were always going to be incredibly high for the fact that it's production company is Walt Disney Studios. Disney are one company who are always capable of creating a classic. It is true that The Lone Ranger may not be a classic, but it is definitely not the worst movie of 2013. It is far from the best, but there is something about this bunch of silliness that does make it entertaining enough.

In 1866, a train chugs towards the future carrying lawyer, John Reid (Armie Hammer), as well as prisoners, convicted criminal, Butch Cavendish (William Fichtner) and Indian, Tonto (Johnny Depp). Cavendish escapes in what appears to be a set up, which leads to a man hunt by John's brother, Dan (James Badge Dale) and the deaths of all the search party at the hands of a traitor. In a strange turn of events, John starts working with Tonto and finds out more than he would have liked to have known about the dealings of the white people with the Indians of the land.

Based on an American legend, The Lone Ranger is all just a bit silly. It is so over the top and cliché in it's execution and there is really nothing you can take seriously about it. The romance aspect of the film adds nothing to the story and really could have been cut out of the film entirely, which would have shortened it's 149 minute running time. The idea of having an elderly Tonto tell a young boy at a San Francisco fairground the story is also completely useless and the film would have flowed a lot better if it was told in real time rather than a series of flashbacks. Therefore, it is the screenplay, written by Justin Haythe, Ted Elliot and Terry Rossio, that is one of the key factors in what fails to make this film a Disney classic. The story itself isn't too bad as it does have some unpredictable revelations, but the screenplay tries to do a little too much.

As it is promoted, The Lone Ranger is from the same people who have brought us Pirates Of The Caribbean. So what a lot of people are saying and quite rightly so is that this is a western version of Pirates Of The Caribbean. Chances are if you weren't a fan of those swash-buckling films, you won't be a fan of this film. Johnny Depp's Tonto is a native American version of Captain Jack Sparrow and the choreography of the action scenes is also very similar. The good thing is that if you are one of those people who did love the Pirates films, then you may be a fan. 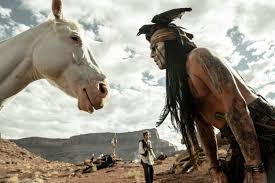 However, the good news is that with all it's faults, The Lone Ranger is at least entertaining. The best part of the film is the last half an hour which is almost like a cleverly composed dance number set in the west. The musical score is almost strangely selected, but does serve its purpose by setting the scene and creating a feeling of suspense and excitement. A great film needs to be this the whole way through, but the last 30 minutes is worth watching the whole film for.

Johnny Depp has always been the actor who loves to perform "different" roles and has made different his norm. He may not be the best native American ever on screen, but he still pulls off the role believably enough. He is also, of course, entertaining as we all know Depp to be. Armie Hammer does fine as John Reid, but it is arguably not a very hard role to play and does not require too much emotion. Helena Bonham Carter's character is not particularly needed in the film, but she is always a treat on screen. Ruth Wilson is another who's character as Reid's sister in-law/ romantic interest is not particularly needed and not a particularly exciting character on screen.

The Lone Ranger perhaps doesn't need to be accused of being as big a disaster as it is being made out to be, but it is not a Disney classic. Just a splash of entertainment for the here and now.

You may have also seen Johnny Depp in......
Pirates Of The Caribbean: On Stranger Tides as Captain Jack Sparrow
Alice In Wonderland as The Mad Hatter

You may have also seen Armie Hammer in.....
The Social Network as Cameron Winklevoss/ Tyler Winklevoss