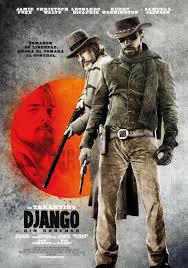 Where do you go from that name? His directorial style is one of the most recognisable in this day and age. He is one of a kind. He is able to do things in his movies that if other people attempted to do, they would be criticised till the cows come home. Yet, when Quentin Tarantino does it, it is considered genius.

Tarantino’s last two films, Inglorious Basterds and Django Unchained have taken him in a new direction with his film making. He does historical films in such a unique way. He doesn’t neglect what makes his film making style recognisable and remembers that making a film is about entertaining as well as informing. Both of the mentioned films are quirky in the Tarantino way, but quirky when you are Tarantino means brilliant.

Honestly, this is one film I would love to see win Best Picture at the Academy Awards.  I think it has everything it takes to win. So it aches to say that I don’t think it is the winner, even though I would love it to be. It may just still be a little too extreme to win. However, it definitely is one of the best films of the year and there are no complaints about it being one of the nine films nominated.

This being said, I think it is a certainty to win Best Writing, Screenplay Written Directly For Screen. Yes, Tarantino did win this award at the Golden Globes so chances are good for him, but it is an amazing script. Brilliantly written and a verbal dream.

Another name which is right up there is an Oscar contender is Christoph Waltz for Best Supporting Actor.  His main competition it would seem is Tommy Lee Jones for Lincoln, but as Lincoln has yet to be released in Australia, I can’t make an informed decision as of yet. I will say that Waltz’s performance in Django Unchained is Oscar worthy. We’ve seen Waltz play the bad guy on a few occasions now, but here he shows his versatility playing the good guy and does so with so much character and charisma that when you leave the cinema, you feel like you want to go and visit him to spend more time with that character.

American history gets the Quentin Tarantino treatment in Django Unchained and for that we are thankful.

The year is 1858 and slave, Django (Jamie Foxx)is about to become a free man. German bounty hunter, Dr King Schultz (Christoph Waltz) takes Django under his wing to help him find a set of wanted men, but then seeing promise in him makes him his partner for the winter. As a condition, Dr Schultz will help Django find and free his wife, Broomhilda (Kerry Washington). Before Django and Broomhilda can be together, they have some life-threatening hurdles they must face all in the form of plantation owner, Calvin Candie (Leonardo DiCaprio).

The Tarantino technique of film making makes viewing a historical film unlike any other film in the same category. The way he combines, in this case, brilliant dialogue by colourful characters with amazing cinematography, crazy images and a unique musical score is an absolute winner.

It is not often you watch a historical film that has music which is associated with the present time accompanying it and it actually works for it. Images of slaves heading towards a plantation with rap music playing in the background is something you know isn’t right, but it seems perfect.

The script is just brilliant. The dialogue used throughout the film is perfect for each of the characters and very interesting to listen to. There are some very funny lines in the film, and one scene in particular involving cutting holes in sheets is hilarious.

The characters created by Tarantino, who also wrote Django Unchained as well as directed, are just fantastic. All the main characters have a background and their development is fantastic. You love the good guys and hate the bad guys. The good guys become your friends and the bad guys your evil enemies.

Jamie Foxx is very good as lead, Django (the “D” is silent). He is the perfect example of wonderful character development. He starts off at the bottom of the food chain and you see him change and become arrogant, and then changes again to ensure survival. Django becomes like a rock star who deserves applause and cheering.

However, Christoph Waltz is in a class of his own here. Even though he is being categorised as being in a supporting role, he outshines Foxx in every scene he is in. He has so much charisma and is such an interesting character. Dr Schultz was written so well by Tarantino and brought to life by Waltz in spectacular fashion. This is one director/actor team that can do no wrong, considering this is the second time Tarantino has directed Waltz and could well be the second Oscar win form this partnership.

Django Unchained is the first film in which Leonardo DiCaprio has taken on a villainous character and proved that…yes….this man can do anything. He is terrifying. There is nothing better than when a character is terrifying without needing a scary physical appearance to add to this perception.

Samuel L. Jackson is one that tends to flourish under Tarantino’s light as well. Here he is another great character. Playing Candie’s butler, Stephen, he has hints of being a good guy, but is ultimately evil. He is quite evil, but also provides a few giggles.

Don’t be fooled, this is Tarantino film so there is violence. If you didn’t his earlier films because of the violence and language, don’t think that he has changed this. There is lots of blood spilt and F-bombs dropped, but they aren’t the centrepiece of the film and there is a great movie around it.

Django Unchained is Tarantino’s best film to date (which is no light comment). A quirky film in which everything is exaggerated, but done in the most brilliant way possible.