After 2009's Star Trek, it became evident that you don't need to be a Trekkie in order to appreciate the film and the same can be said for Star Trek Into Darkness.

J.J. Abrams is perhaps the most in demand director in Hollywood at the present time when it comes to sci-fi and he shows in this film why that is. Star Trek Into Darkness can be watched and enjoyed by those who are not usually sci-fi or Star Trek fans. Keep in mind though, don't expect to understand who the characters are and what they are about if you haven't seen the first film or past members of the Star Trek family. 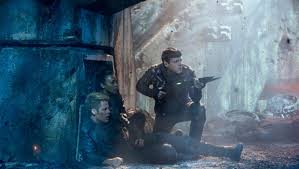 Captain of the USS Enterprise James T. Kirk (Chris Pine) loses his position on his ship after violating prime directive in order to save Spock (Zachary Quinto). A new and dangerous enemy by the name of John Harrison (Benedict Cumberbatch) has emerged who has a grudge against Star Fleet. The Enterprise sets out to seek Harrison and have instructions to fire all 72 torpedoes which are on board on sight. Harrison has a few surprises up his sleeve when he, Kirk, Spock and Nyota Uhura ( Zoe Saldana come face to face with each other.

Star Trek Into Darkness is an absolute treat for Trekkies, sci-fi fans and those who enjoyed the 2009 film.  The enjoyment of this film isn't restricted to those three watching categories. It has some incredible action scenes and amazing special effects. This film has more action than what many genre action films have. The sound effects are also pretty incredible that accompany the special effects, as well as being on the brink of deafening. The CGI is also amazing and the recreation of the future of San Francisco incredible. 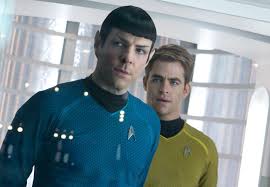 The screenplay isn't bad. The story is easy to follow and perhaps a tad simple, but that is fine because it is executed in spectacular fashion. There are some good laughs at the hands of Kirk, Spock, Bones (Karl Urban) and Scotty (Simon Pegg).

The only real problem, if you can call it that, is that unless you have seen any of the Star Trek films, you may not enjoy this film as much as you could. The storyline itself isn't much of a challenge to understand, but it is the characters that are not able to be enjoyed for who they are. However, this is the same in any type of film in a series. It is not a major problem, but it does help to have that reference at hand. 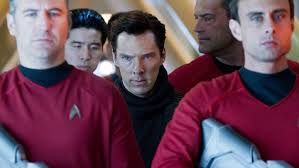 Benedict Cumberbatch is the absolute star of the film. He is just so interesting to watch on screen and steals every scene he is in. You cannot tear your eyes away from him. The scene in which he talks about losing his crew is so powerful. Cumberbatch is brilliantly evil.

Chris Pine does well in his role, perhaps better than he was in the 2009 film. Zachary Quinto is very, very good as Spock. His dry sense of humour is fantastic and the moments when he breaks his Vulcan mode he is fantastic. The chemistry between Pine and Quinto is great, as is that of the two and Karl Urban.

Star Trek Into Darkness lives up to it's expectations of being one of the biggest blockbusters of the season. It is worth all the excitement. If action is what you want, J.J. Abrams provides.


On a side note.....
This is completely off topic (well, not completely), but when I saw Star Trek Into Darkness and saw Zachary Quinto on screen for the first time, this is what I thought of.


"The Big Bang Theory" has a lot to answer for when it comes to Star Trek! And when thinking about Leonard Nemoy, this is the scene I thought of.


I'm not quite sure that Trekkies will be completely impressed that I have used this space to show Star Trek references in "The Big Bang Theory", but they are always good for a bit of a giggle!
Posted by NP1982 at 2:16 AM