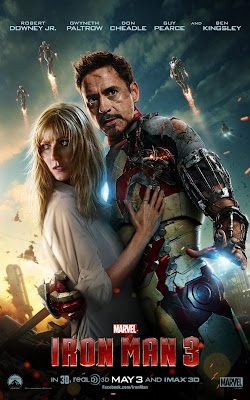 Normally as movies progress to the sequel and beyond, there tends to be a decrease in the quality of the films. This is just an assumption you take with you to a film, especially when going to see a third installment of a film and the sequel really wasn't that great.

That is why Iron Man 3 is such a delight.

No matter how good the trailer looked, you were always weary about Iron Man 3, especially after the disappointment that was Iron Man 2.  However, there is no need for concern. Iron Man 3 is the film you wish was the Iron Man sequel. Unlike Iron Man 2 which was all over the place, Iron Man 3 is clean cut with a great screenplay and is just all round entertaining. A great film to kick off blockbuster season with.

Iron Man 3 picks up when Tony Stark (Robert Downey Jr.) has returned from his alien encounter in New York and is struggling to come to grips with his anxiety issues. A new enemy has emerged in terrorist, The Mandarin (Ben Kingsley) and when he hits a little too close to home and Happy (Jon Favreau) falls into a coma, Tony seeks revenge on The Mandarin. He soon finds out that he has more enemies than just The Mandarin that he needs to worry about.

The screenplay (written by director Shane Black and Drew Pearce) for Iron Man 3 is extremely impressive. There are twists and turns galore and some real surprises during the film. Unlike many action blockbusters, there is more to this film than just the action and special effects. Of course these are also amazing, but the story is completely intriguing. You could probably categorise Iron Man  3 as an action/ thriller as Tony Stark does channel a bit of his inner Sherlock Holmes (funny about that).

Shane Black is to be given huge credit for what he has done with Iron Man 3. Not only is the film well directed, but the decision for Jon Favreau to step aside as director after the first two films gave Iron Man a breath of fresh air and doesn't make us feel like the film is trying to achieve what the previous films have done. Iron Man 3 is a good film in it's own right and works as a stand alone film. Therefore, even if you haven't seen the first two films you can understand and enjoy the third film.

One expects that the special effects and action are going to be pretty impressive in a film like this, and they are. The sight of Stark's Malibu mansion tumbling into the ocean is pretty incredible and let's face it, Iron Man is just a great special effect in himself. There are several other amazing moments in the film, but many which cannot be spoken of without giving too much of the film away.

Robert Downey Jr. is Tony Stark. The character is absolutely his own and even  though you sometimes wonder if Downey Jr. is just playing himself, he is still just fantastic on screen. Stark has so much character and is just great fun to watch and cheer for. There are moments throughout the film when Downey Jr. reminds us what a brilliant actor he really is. 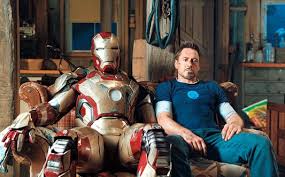 Another cast member who shines in Iron Man 3 is Guy Pearce. Pearce plays Aldrich Killian, a scientist who encountered Stark back in 1999 and has an eye for Stark's girlfriend, Pepper Potts ( Gwyneth Paltrow). Without giving too much away, Pearce plays evil well. His performance is by no means forced and he just seems so natural in the role (one hopes that that isn't the case!)

Gwyneth Paltrow isn't bad. Her and Downey Jr. have great on screen chemistry. Ben Kingsley is great, as one always comes to expect from him. Ty Simpkins, who plays Stark's unlikely partner in crime Harley, is very good and one remembers him long after walking out of the cinema.

Iron Man 3 is the film Iron Man 2 should have been. However, it doesn't really matter as we are happy it happened whether it be second or third in the Iron Man order.

On a side note...
One thing I was impressed with was how tactfully Iron Man 3 linked in with The Avengers.

Marvel really have a good thing going at the moment. Their superheroes are going from strength to strength (excuse the pun) on the big screen and will continue to do so. Three members of The Avengers, including Iron Man have films coming out in the next year. The sequel to Thor, Thor: The Dark World is due to be released in October this year and the sequel to Captain America: The First Avenger, Captain America: The Winter Soldier is currently in production and to be released in April 2014.

The Avengers 2 has been announced and has a scheduled release for 2015 which many people may find exciting. I am interested as to how they are going to tie all the characters in again. People who have seen Iron Man 3 will understand why I am watching this space with interest.

One thing is for sure, superheroes are alive and well in the movies.

You may have also seen Guy Pearce in.....
The King's Speech as King Edward VIII
Prometheus as Peter Weyland
Lawless as Special Deputy Charlie Ranks

You may have also seen Ben Kingsley in....
Hugo as George Melies