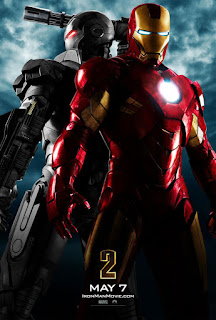 In My Own Words
Ah the action sequel. The second film in a superhero series. There are two givens with a film such as this, high expectations and box office success...and “Iron Man 2” definitely comes with both of these! There was never any doubt that this film was going to make a significant amount of money and draw in huge crowds. The first “Iron Man” was a massive success and delighted movie goers that were not normally superhero fans, which in turn meant a success for the second film as the “Iron Man” phenomenon had such a large appeal. And the high expectations, were they met? Do the majority of expectations for an action sequel ever get met? The answer to both these questions is no.

I pose the question. Are action sequels just made for the money or for the love of the director for the film? I would say both, but an action blockbuster sequel (or any sequel to a film which had any success at the box office for that matter) does equal money, no matter how bad the film is. Don’t get me wrong, “Iron Man 2” was not one of the worst sequels I have ever seen, but it was not one of the best. However, the overall quality of the film in this case will not affect the box office figures. “Iron Man 2” has not received favourable reviews from other sources, yet in its second week it is still topping the US box office. The film does do its job, which is to entertain. If you do go to see “Iron Man 2’, I can guarantee you that when you look around the cinema as soon as the lights go up, you will see the same thing on everyone’s lips, “It wasn’t as good as the first one”.

Review
Jon Favreau’s “Iron Man 2” is not quite the action packed sequel the world was expecting. While most sequels tend to heighten the action sequences, comedy and sex, it seems like “Iron Man 2” went backwards with all this. Sure the gadgets are all there, but the film just lacks. Even as a stand alone film and completely disregarding the first film, it is still a disappointment. If it were a stand alone film, it would probably be even more of a disappointment considering the stellar cast, most of which are Oscar-nominated performers. The film takes place six months after the last film and the world is at peace as a result of Iron Man/ Tony Stark’s existence. Everyone loves Tony Stark (Robert Downey Jr. ), and Tony Stark loves Tony Stark! Stark has now become completely absorbed by his fame and is consistently making rash decisions, according to his partner, Pepper Potts (Gwyneth Paltrow), which land him in hot water. At this point in time, Stark refuses to hand over the Iron Man technology, which earns him new enemies with the government and rivalling companies. To make matters worse, he also has Ivan Vanko (Mickey Rourke) after his blood as a result of past tension between his family and Stark’s. And while Stark has all this going on, he also needs to run his company and find some way of saving the world and himself before it is too late.

As is evident from this synopsis, “Iron Man 2” has way too much going on. Sure these stories do tie in with one another and do make logical sense when watching the film, but it is way too much to feel any suspense. Funnily enough, for an action film, there does not seem to be much action at all and the action sequences that are featured aren’t particularly outstanding. Funnily enough though, the film is very well shot. There are moments of fantastic cinematography which Favreau must be complimented for. Visually, it is a pleasure to watch and it does serve the purpose of entertainment, however dull and overly busy it can be at times. There is no tension or emotion in the film and is not anywhere near as clever as the first film.

It is such a shame for a cast like this to have so little characterization for some, and too much for others. Sam Rockwell in his role as Justin Hammer, is completely and utterly annoying. Rockwell himself is a fine actor as has been proven in other films, but he is so ill-suited to this role. He takes the cake as the most annoying villain thus far this year. He talks way too much and his anger in the film is just laughable. Scarlett Johansson’s character, Natalie Rushman, is completely bland and monotone. She fulfils no other purpose in the film besides looking gorgeous. Mickey Rourke is not bad as the devilish Ivan Vanko, but it is a huge step down from his performance in “The Wrestler”. Again, it is not Gwyneth Paltrow’s best performance, but she is in no way bad during the film. She definitely shows that she has a talent. However, it is impossible not to like Robert Downey Jr. Yes he is obnoxious and narcissistic, but he does it so well. He is extremely charismatic and is, as he was in the last film, the perfect man for the role.

Like many action sequels, “Iron Man 2” does not live up to its expectations, nor does it even reach to low expectations. It is entertaining enough, but there is no “wow” factor to it. It can be silly and annoying, and also dull and lifeless. But who can resist the charm and cool of Robert Downey Jr., who is about the only thing (besides Scarlett Johansson in a tight suit for the guys) makes this movie watchable?
5/10