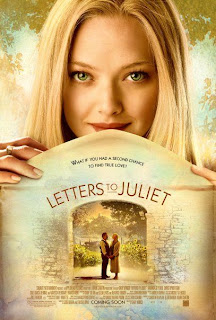 In My Own Words
I’m sure I have mentioned this before, but have you ever noticed how great tourism tools movies are? How many times have you watched a movie and thought about how amazing the location in which it is based is? Some locations are even more impressive than the film itself. Take for example “Couples Retreat” which Movie Critical reviewed last year. Very bland movie with an amazing location. I’m sure I’m not the only one who was dying to visit Bora-Bora after seeing it. “Letters To Juliet” has made me even more excited about going to visit Italy next year. Verona and Siena were never on my itinerary before, but after seeing this film I am dying to see some of the Italian countryside and have gelato in a piazza in Siena. I think many people will find that one of the reasons they love their favourite film is because of where it is set. I’m not saying that this is the only reason you will love your favourite film, but it doesn’t hurt! “Letters To Juliet” is far from my favourite film, but the fact that it was set in Italy is one of the reasons I liked it!

Does anyone else do this? When you are going on a holiday, do you make an effort to watch films or TV shows which are set in that place? I believe it is one of the best ways to get yourself excited for a holiday. Needless to say that because I am planning a trip to Europe in February, “Four Weddings And A Funeral, “Amelie” and “Life Is Beautiful” are definitely going to get a run in the DVD player at least twice before then!

Review
“Letters To Juliet” is an easy to watch film, yet unlike many other romance films this year, does manage to bring a tear to your eye. It can be argued who the true star of “Letters To Juliet” is. Is it Amanda Seyfried or the Italian countryside? Definitely a girl’s film with a ton of predictability and cliché’s, but still entertaining and sweet all the same. Sophie (Amanda Seyfried) is a would-be writer who travels to Verona, Italy for a romantic getaway with her fiancé, Victor (Gael Garcia Bernal). However, the trip soon becomes a working holiday for Victor and Sophie finds herself having to experience Verona on her own. On a visit to Juliet’s balcony, she meets up with a group of women who respond to the letters that women in love leave asking Juliet for her advice. Sophie finds a letter which was written 50 years ago and responds to it, not thinking that the woman in question will take her advice and travel back to Italy from England to search for her once lover. Sophie decides to tag along for the journey with Claire (Vanessa Redgrave) and her grandson, Charlie (Christopher Egan).

As expected, some of this movie can come across as quite silly and farfetched. Yet, as silly and farfetched as the concept may be of girls leaving notes for Juliet, there is actually some truth to this. Many letters are sent each year addressed simply to “Juliet, Verona” and there is a group who responds to these letters, much like the one in the film. A romance film about this concept could only have a predictable ending, a girl finding her one true love while in fair Verona. There is no doubt at all during the film as to what the ending will bring. Some of the dialogue is a little too cheesy and simple and it is not quite as comical as what it would’ve liked itself to be. However, the cinematography and locations used are extraordinary. Italy is on show in this film and does not disappoint. The best thing about this film is that the scenery works with the romance aspect of the film and makes this light film even sweeter.

Amanda Seyfried is an absolute star in this film. She definitely shows her strong acting ability and lights up the screen in every scene. She is absolutely stunning, likable and this could well be her finest film performance thus far (“Mamma Mia” not being far behind). Seyfried exhibits every emotion perfectly and gives and extremely heartfelt performance. Vanessa Redgrave is also a delight to watch and very sweet. Christopher Egan also does well, and shows his talent with mimicking an English accent impressively. However, the character of Victor, as played by Gael Garcia Bernal is extremely irritating. From the first scene you just want to slap him across the face and he and Seyfried have absolutely no on screen chemistry. His dialogue is badly written and Bernal is badly miscast. If the film makers wanted the audience to dislike him right from the word go, they have achieved this.

“Letters To Juliet” is an incredibly sweet film is emotional enough to draw a tear, yet not emotional enough to make it heart-wrenching. It is very unlikely that any male will enjoy this film as it is definitely a chick flick, however many will be dragged to the cinemas by their girlfriends. A fine advertisement for the Italian countryside.
5.5/10