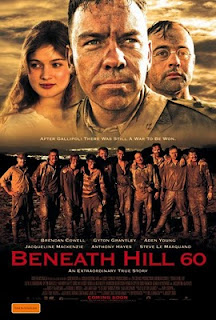 In My Own Words
I am so ashamed that it has taken me 7 months into Movie Critical’s existence to review my first film from my homeland, Australia. It really is very sad how little media attention Australian films receive here in Australia. One would think that they would be insanely popular, but no. I am a big supporter of Australian film as I do believe that there are great Australian filmmakers out there, but the problem is that the Australian film industry is nowhere near as successful of has as much financial support as other countries. According to Screen Australia’s website “Get The Picture”, the total box office expenditure of 2009 was $1087.5 million, with only $54.8 million of this being made by Australian films. 349 films were released in Australian cinemas last year and only 46 of these were Australian films. I can only hope that this review will encourage more Aussies to go and see more home grown movies, and that it will encourage overseas readers to watch out for Australian films at their local cinema.

“Beneath Hill 60” has recently been brought by UK film distributor, Momentum Pictures, which is great news meaning that the world will get to see more great Australian cinema. One of the problems that many Australian films face in being taken abroad is that the films do not appeal to the global audience. However, I do believe that this will not be the case with “Beneath Hill 60”. Yes, there is a lot of Australian slang used in the film, but first and foremost it is a war film based in World War I and has greater appeal than just Australians. It is the best Australian was film since “Gallipoli” and there is no reason why it shouldn’t be considered for the Australian Film Institute Awards in 2011. For our overseas readers, I also have to say that this film was released just in time for Anzac Day here in Australia. ANZAC stands for Australian New Zealand Army Corps and 25th of April is the day that we pay tribute to all the soldiers that have fought for Australia. “Beneath Hill 60” was released on April 17th and was perfectly timed for this occasion.

Review
A good war film is never an easy ride, as “Beneath Hill 60” proves. It can be completely gut wrenching and tear jerking at times, not to mention completely suspenseful. The hardest part of this film, and indeed any war film, is realising that it is not all just make believe, that there are people out there who have and will continue to experience these horrors. “Beneath Hill 60” is based on the true story of Captain Oliver Woodward (Brendan Cowell), who finds himself on the western front in World War I, working in the underground tunnels below Hill 60. Here, he and his group of soldiers work in the tunnel system to try and carry out the biggest man made explosion to date.

Like many war films, this film shows the horrors of war and how war takes its toll on the soldiers. There are some very emotional and hard-hitting moments, and many scenes that are not for the faint hearted. However, the setting of the underground tunnels does set this film apart from the stereotypical war film of fighting on land, although there is this as well. The script is very well written and tells the story of these soldiers in such a way that it is enthralling from start to finish. The film is very suspenseful, yet the first half is more suspenseful than the second. It seems like the first half and the second half are almost two storylines, but nevertheless, both are good in different ways. The cinematography is good for the most part, but the special effects are not quite as lifelike as what one would hope. The musical score and sound are also fantastic, as is the ability of director, Jeremy Hartley Sims to recreate the warfront and early century Australia.

Brendan Cowell is the star of “Beneath Hill 60” and gives the standout performance of the film. He carries himself beautifully throughout the whole film and shows the change in his character as the film goes on. He is able to be the tough soldier, the smart mouthed new guy, the gentleman and the mentally wounded ex-soldier all in one film and carries each persona out perfectly.

“Beneath Hill 60” may be too much for some people to watch, as it is gory in the way which war films are and can be very upsetting. It shows the ways in which war affects soldiers emotionally and how boys come back from war as men and no man comes back the same as they left. However, it is a beautifully made film and definitely one to be seen and praised.
8/10