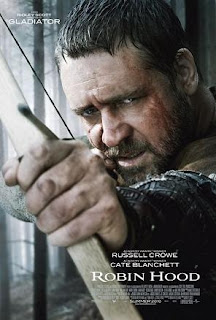 In My Own Words
There have been so many Robin Hood adaptations over the years. Robin Hood is actually quite a complex topic, a lot more complex than what I ever thought the story or the person actually was. Until I saw Ridley Scott’s latest adaptation of the folk story, I had always assumed that Robin Hood was a fictional, but now I find that this may not be the case. Well, it is a mystery as to whether Robin Hood did actually exist or not. Many people have speculated over the years as to whether he is just folk lore and was made up to cheer on the underdog or if there was a real person. According to research done over the years, there are several figures in history whom Robin Hood could have been based on. In my curiosity, I came across a fantastic site by the name of “Robin Hood Bold Outlaw of Barnsdale and Sherwood” (http://www.boldoutlaw.com/realrob/realrob2.html) . Allen W. Wright, the owner and writer of this site, has done some fantastic research of who the real Robin Hood was. According to Wright, there are a number of people whom the story of Robin Hood could be based on, such as Robyn Hood who worked in the kings court in the 1300’s, or Robert Hood who was from just outside Barnsdale and who’s wife was Matilda, which is what Maid Marian was also known by in some versions. Nobody has yet made a conclusion as to whether the legend of Robin Hood was based on a single individual, or if he is the result of the combination of many different historical figures. Whether the legend of the man himself is true or not, there is no denying that he has not only inspired many books, films and stage plays over the years, but he has been a representation of how the good hearted underdog can always triumph over the oppressor.

Unfortunately, I don’t think the 2010 Robin Hood will triumph as anyone’s favourite Robin Hood adaptation. Not as heartfelt as 1991’s “Robin Hood: Prince Of Thieves”, even though that still isn’t my favourite Robin Hood adaptation. You can’t go past Disney’s 1973 animated version. Who can go outdo the brilliance of Robin being a crafty fox and Prince John and King Richard being lions? The fox Robin Hood is my perfect Robin Hood, although Kevin Costner and Errol Flynn are not far behind. Even though Russell Crowe is the oldest actor thus far to play the hero, he still fits the role and is the perfect choice out of today’s actors to do the job.

Review
Ridley Scott’s 2010 version of ‘Robin Hood’, which opened the Cannes Film Festival yesterday, is unlike other Robin Hood tales. This latest version is the prequel to traditional Robin Hood legends where Robin conquers over the Sheriff of Nottingham and sides with King Richard. Robin Longstride (Russell Crowe) is an archer in King Richards army when he is entrusted to deliver the kings crown back to London when he has been killed in battle, as the initial carrier, Robert Loxley(Douglas Hodge) is killed by Sir Godfrey (Mark Strong). Upon returning to Loxley’s hometown of Nottingham, he encounters Loxley’s widow, Lady Marian (Cate Blanchett) and finds out more about where he himself has come from. During this time, he is treated as a hero in Nottingham and wins the affections of Lady Marian. Upon discovering who he really is, Robin and his group of men set off to defend their country and rise up against higher powers in society.

The main disappointment about this film is that it starts off so strong. The beginning is so promising, with action and perfect character development. However, it does not maintain its excellence throughout the course of the film. When each of the characters are introduced, they are in such a way that the audience forms an emotional opinion about each one of them. For example, Prince John is in his very first scene obnoxious, immature and crude, exactly the way you would expect and want Prince John to be. Although he is so vulgar, it is almost exciting to see such a strong first impression of a character. Unfortunately, the film isn’t constructed in its entirety to maintain this strong opinion. This is no fault of the actors, but more of the scriptwriters and Scott as more effort should have been put into ensuring that the audience maintains an emotional connection to the characters. The actors definitely do all they can with the roles they are given. Russell Crowe is a perfect Robin Hood. He is an unlikely hero who is rough around the edges, but still shows his vulnerability and soft side. Cate Blanchett is also beautiful as Lady Marian and is also a lady, but definitely rough around the edges just like Crowe. Therefore, these two have a great on screen chemistry, but again, there is not enough to show how these two fell so deeply in love. It feels like it happened quite suddenly. Mark Strong is great as Sir Godfrey and Oscar Isaac is also very good as Prince John.

However, there is no denying that “Robin Hood” is a well made film. Medieval England and France are recreated so beautifully. The scenery is breathtaking and the way in which it is captured on film is commendable. Scott’s choice of settings for each scene is perfect, especially for the battle scenes. The editing is also very well done and the score is perfectly suited to every scene that it accompanies. It should also be mentioned that Scott does not fall into the trap that many other films about this era do, he does not cave into the idea that medieval England was glamorous. The wilderness is still a rugged place and only the king and queen have costumes which could be considered fashionable. It is definitely not the way the film is made that is the let down, but rather the way the story is carried out. Despite the majority of the audience knowing what the outcome will be, there is still no suspense or tension. Although the film is 2 ½ hours long, it does not feel that long and it is actually confusing why so little is accomplished in this time.

This latest adaptation of the Robin Hood legend is nowhere near as powerful as what it should be. It could be so much more, but instead is just very soft and dry. It is still a good watch, as there is some impeccable acting and cinematography. Adventure lovers will enjoy seeing this film, as will fans of Crowe’s work.
6.5/10