What happens to the people who are accused of a terrible crime, but are actually innocent?

This notion is explored in The Hunt. The film shows how innocent until proven guilty is the way it may work in the legal system, but in the mind of members of society it is more guilty until proven innocent. The Hunt gives us plenty to think about when we leave the cinema and also makes wonderful viewing with some incredible performances.

Lucas (Mads Mikkelsen) has had a rough time after losing his job as a teacher and having to fight for custody of his son, Marcus (Lasse Fogelstrom). Things start to look up for him when he starts work at a kindergarten and starts dating Nadja (Alexandra Rapaport). Just when it looks like things may just be on the right track, one of the children at the kindergarten accuses Lucas of something terrible. Lucas is innocent, but it will take a lot more than his word to make everyone think otherwise. 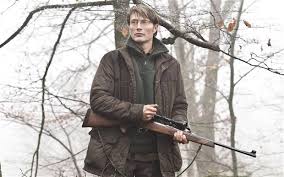 The Hunt deals with the confronting subject that is pedophilia, but it doesn't deal with the act of paedophilia. It deals with how people react to the accusation of it. We see how the family of the victim deal with it and how the people around the accused act towards them. What the film also looks at is what happens to the accused who are actually innocent. Even if they are not charged as being guilty and the accusation is still there, they might as well still be guilty. People change around them and their whole world is turned upside down by a lie.

So the film isn't really as confronting as it may sound like it is going to be as it is not graphic. It just really challenges your mind. The Hunt does have a thrill to it, as you are completely unsure how it is going to finish  and what will happen to Lucas.

The Hunt puts Danish film making on show. It has a wonderful combination of magnificent direction, cinematography and acting. The Danish wilderness is transferred to the screen beautifully. The hunting scenes in the snow are truly breath taking. 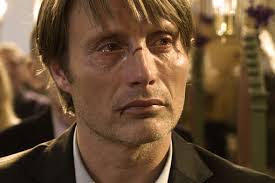 It was for this film that Mads Mikkelsen was nominated for and won Best Actor at the 2012 Cannes Film Festival and rightly so. He commands the audience's sympathy right from the beginning of the film. You feel so much pain for this poor man who has nothing go right for him at the hands of someone else.

The other star of the film is little Annika Wedderkopp who plays Klara, the little girl who tells her classmates that Lucas exposed himself to her. You think about a little child who has innocently told a lie which has had a major impact, and even though it was done without her knowing the full implications, you still feel dislike. However, it is so hard to be mad at Wedderkopp. Apart from the fact that she really is a little cutie, she plays the role with such purity that she is impossible not to like. You actually do feel sorry for her by how awkward she seems in the whole situation. It's incredible for such a young little girl to give such a beautiful performance.

It isn't just these two who give amazing performances. Lasse Fogelstrom is fantastic as Marcus and Thomas Bo Larsen, who plays Klara's father is also incredible.

The Hunt is so special because it approaches a subject from a different angle than the way it is normally talked about. It makes you ponder what you would do in the same situation and how you would behave towards someone who was accused of something, but proved innocent. Would you still treat them as if they were guilty and refuse to believe they are innocent in order to prevent yourself from guilt? Or would all be forgotten?


On a side note....
It's incredible to think that here we are talking about Mads Mikkelsen being named Best Actor at the 2012 Cannes Film Festival and the 2013 festival is only days away from starting.

Even though I am on the other side of the world, it is always a very exciting time of the year for me. Any film festival is an exciting time really, but Cannes is one of the most, if not the most prestigious of them all.

I love hearing about who the winners are and which films are making their debut. I always get to find out what amazing movies I have to look forward to. And of course, there are always the films that I thought I was looking forward to but if the word from Cannes is unfavourable, then I might not look forward to it as much. Doesn't mean I won't go and see it and make my own mind up though!