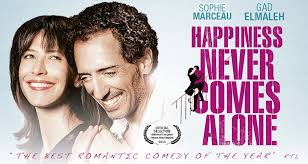 If you are starting to get a bit tired of watching the action blockbusters which grace our film more often that not at this time of the year and drama films are just a tad too emotionally taxing, then Happiness Never Comes Alone may just be the break you are after.

Happiness Never Comes Alone is an incredibly simple fun film with an extremely easy story to follow. It doesn't delve deep into your emotions or leave a lasting impression, but it does still give some great laughs and some beautiful moments in amazing Paris. 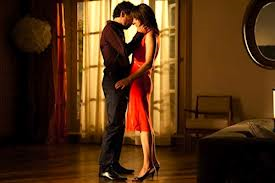 Sacha Keller (Gad Elmaleh) is a free spirited bachelor who writes jingles for commercials by day and plays piano at a jazz club at night in exchange for an open bar. He feels like he has got it made, until by chance he meets accident prone Charlotte (Sophie Marceau). The two instantly fall for each other and they seem like they are made for each other. However, things become complicated when Sacha discovers that Charlotte has three of the things he is terrified of, children. Not only that, but she is the ex-wife of one of his company's biggest and most powerful clients.

Happiness Never Comes Alone is a very simple film. It is nothing that we haven't seen before, but still has a certain charm to it. Because of this lack of originality, you do leave the film trying to figure out what the whole point of the film was and what is the lesson you are supposed to be taking away from it. Of course, there is the common theme we see in romance films that the two people in love will always be in love no matter what. You can probably take away the idea that anyone can change their lifestyle when the right person comes along, but you are still waiting for something a tad more insightful to hit you.

Yet, it is the humour and visuals of the film which keep the film from becoming a dud. The script is really very funny in parts with some great one-liners (especially when Sacha likens Leonard to "a little Philip Seymour Hoffman"). The antics of Sacha with the children are hilarious as are Charlotte's string of unfortunate but hilarious accidents. 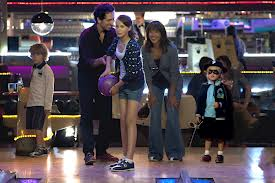 The cinematography is also quite beautiful and shows off Paris. In particular, the scenes which are set in Sacha's Montmarte apartment show the Sacre Coeur Basilica in the reflection of his window. A great way to show off the beauty of the city.

One thing about the film is that it's soundtrack is perhaps not used in the most effective way. In two particular scenes which are when Sacha and Charlotte meet for the first time and the final scene, they use a love song turned up to drown out any other sound. It is meant to enhance the emotion in the scene, but it is not done in a subtle way at all. When the music starts, you are waiting for something funny to happen because it is so blown out of proportion. 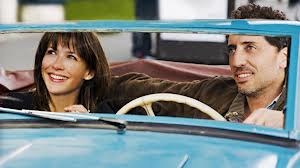 Gad  Elmaleh doesn't do an altogether bad job as Sacha, but it isn't a particularly emotional performance. He doesn't connect with the audience on an emotional level at all really, whether it be with Charlotte or with her kids. Sophie Marceau does do better and you can feel her love and pain in every scene she is in. Her Charlotte is an extremely likable character. The chemistry between Elmaleh and Marceau is completely enthralling.

Whether or not Happiness Never Comes Alone leaves a lasting impression on you, it does bring a smile to your face. Sometimes simple is just what we need in this harsh world.