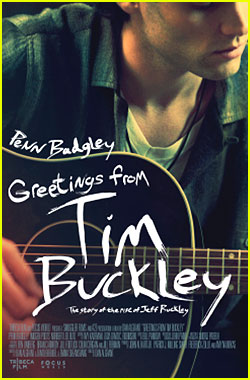 Year: 2012
Director: Daniel Algrant
Cast: Penn Badgley, Imogen Poots, Ben Rosenfield, Kate Nash
Limited release now showing in the US. To find out which cinemas this film is showing at, please see here
Showing at the Sydney Film Festival on the 7th and 15th of June. Please see here for tickets and venues

Greetings from Tim Buckley is not your typical biopic.

This is set to be the pick of the upcoming Sydney Film Festival for music lovers, especially fans of both or either Buckley's. It is not the biopic you may be expecting if you want to look at their whole lives, as Greetings from Tim Buckley looks primarily at one stage in Jeff Buckley's life with some flashbacks to a certain part of Tim Buckley's life. However, the main reason everyone should see this film is to witness an absolutely incredible performance by Penn Badgley.

In 1991, Jeff Buckley (Penn Badgley) receives a call asking him to attend and be part of a tribute concert to his father, 60's musician Tim Buckley (Ben Rosenfield). Jeff battles with his emotions leading up to the night because of a father who died when he was only eight years old and didn't particularly feature in his life before then. He and production assistant, Allie (Imogen Poots) explore the New York of his father as Jeff decides whether he wants to pay tribute to a father he never knew. 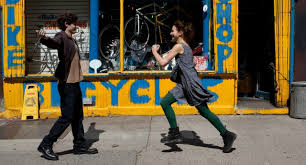 What many people will find with Greetings from Tim Buckley is that this film only covers a few days in the life of Jeff Buckley. It is not a life story about Tim or Jeff. We get an idea of what both of their lives were like in the time periods we don't visually see, but it is a very small time period we are seeing on screen. Some people may find this makes the film quite slow and perhaps even boring. Nothing really ground breaking happens in these few days, but this is more a tale of personal growth for Jeff Buckley.

Fans of either of the Buckley's will love this film, particularly those of Jeff. The movie does complete justice to Jeff Buckley. It is important to remember for those fans before you walk into the cinema that Greetings from Tim Buckley is not completely historically accurate.

Fans of live music and the genre's which the Buckley's dwelt in will really enjoy a fantastic soundtrack. Not only is the end concert scene wonderfully recreated, but the use of Tim Buckley's music throughout is well done. Particularly the scene when "Once I Was" is playing on a video and the song continues as you see Jeff's inner turmoil at being faced with showing support to the man who never did him. And no, you don't need to be a fan of or even know anything about Tim or Jeff Buckley in order to understand or enjoy the film.

The impression of using a hand held camera in filming works at times in the film, but can also seem a bit dizzying and makes it a bit harder to focus.

The reason everyone should see Greetings from Tim Buckley is to see the incredible power of Penn Badgley. Many people only think of Dan Humphery from "Gossip Girl" when they think of Badgley, but there is nothing "Gossip Girl" about him here. Badgley IS Buckley. His performance is wonderful. The only flaw being that when you compare him to Buckley, Badgley's speaking voice is quite a bit lower.  He comes across so natural and you truly believe you are watching Jeff Buckley perform. You have one of those moments when you go away and listen to a Jeff Buckley song such as "Last Goodbye" or "Hallelujah" and you see Badgley singing...until you see a picture of Buckley again to rectify that. Badgley sang every one of the song's his character sings in the film and you couldn't distinguish between Buckley or his singing, he is just spot on.

Imogen Poots plays her role as Allie with ease and so naturally. Her character is sweet and extremely likable. Ben Rosenfield does well as Tim Buckley, but it is Badgley's moment in the sun.

Greetings from Tim Buckley is the film all music lovers will be lining up to see at this year's Sydney Film Festival, but such an incredible performance by Penn Badgley should be witnessed by all.

For those who don't know a great deal about Jeff Buckley, here is a YouTube clip where he talks about and sings songs from his 1994 album, "Grace".

Such a shame such a wonderful talent died so young at age 30. He was working on his second album when he drowned after a night swim in Wolf River, Memphis Tennessee.

The Sydney Film Festival will be running from the 5th-16th June and we will be covering many of the wonderful films which will be screening there. Please stay tuned.