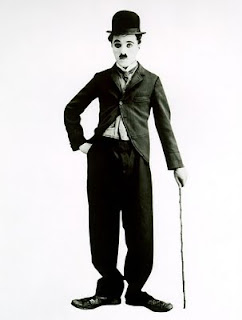 Not long ago, I showed my 10 year old god-daughter a picture of myself with the Charlie Chaplin wax figure in the Madame Tussauds in Hollywood. Both her and her older brothers did not show any signs of recognition of the image of the Little Tramp. I find it really sad that the younger generation may not ever know of the genius of Charlie Chaplin unless they study film. I believe that it is impossible to study film and not at one time or another bump into Chaplin. I truly believe that Chaplin is one of the figures we have to thank for film being what it is today and he really was an extraordinary man. He was never afraid to speak his mind, no matter how much trouble it got him into, and was perhaps the first to put political messages into film. On the flip side, he was the first comedic superstar of the silver screen. So film stars such as Adam Sandler and Will Ferrell have Chaplin to thank for their careers. Even today, people just like myself watch Chaplin films and find themselves in hysterics. People forget how funny actions can be without words on screen. All you have to do is watch "The Great Dictator" to see how Chaplin so successfully combines potlitics and comedy. At the beginning of the film, it says "Any resemblence between Hynklel The Dictator and The Jewish Barber is purely coincedental".  Well, Hynkel is clearly modelled on Hitler, there is no doubt about that. I don't think anything even remotely related to Hitler in any way could be as funny as "The Great Dictator" is. It was completely gutsy on Chaplin's behalf to make a film like this, but the film is also so well written and very, very funny. 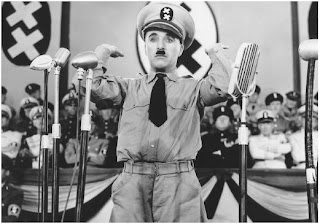 And let's not forget the Little Tramp. I love the Little Tramp for what he represents. In Chaplins words, The Little Tramp is "a tramp, a gentleman, a poet, a dreamer, a lonely fellow always hopeful of romance and adventure. He would have you believe he is a scientist, a musician, a duke, a polo player. However, he’s not above picking up a cigarette butt or robbing a baby of his candy.” I can't help but fall in love with the Tramp. He is always getting into trouble just because he is accident prone and always finds himself in the most unfortunate of situations. Yet, as Chaplin said, he is a romantic and loves the simple things in life. If only we could all see things through the eyes of the Tramp and be happy with life's simple pleasures. 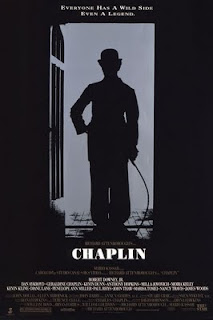 So as the 16th of April is Charlie's birthday (the birthday boy would have been 122 today!) I thought I would post a review for the Richard Attenborough biopic, "Chaplin" which was released in 1992. The film is based on "My Autobiography " by Chaplin and takes us through his early years growing up in London with his mother who was in and out of psychiatric care. He entered the entertainment industry young and travelled to the United States with the troop to persue his career on stage. While in the states, he became interested in film and was summoned to Los Angeles, where Hollywood was in it's very early days. The following years and filled with successes, friendships with such early Hollywood superstars as Douglas Fairbanks and Mary Pickford and, of course, his women.

As one would expect, whoever had the lead role as Chaplin himself was going to have very large shoes to fill ( literally, the Tramps shoes were always too big!). Robert Downey Jr. was Attenborough's choice for the honour, and he is truly amazing. Downey completely embodies Chaplin and one would believe after seeing the film that they had been watching the man himself the whole time. The final scene at the Academy Awards is especially tear-jerking. Downey earned himself his first Academy Award nomination for this film, and rightly so. Another great performance is by Geraldine Chaplin. I could imagine that for her this would have been an extremely surreal experience as Geraldine Chaplin is Charlie Chaplin's eldest daughter to his fourth wife, Oona O'Neill Chaplin (who Geraldine strikingly resembles). Chaplin plays Charlie's mother, Hannah Chaplin, so she is in fact playing her grandmother. She does so brilliantly as well. Kevin Kline also shines as Douglas Fairbanks and Moira Kelly does well to play both Chaplins first love, Hetty Kelly as well as Oona.
Attenborough recreates the atmosphere and landscapes of old Hollywoodperfectly. There isn't much glitz and glamour, but the rolling hills and dusty streets of Hollywood in the 1920's are more true to real life. There isn't a great deal of emotion throughout the film, only really towards the end. However, it is still entertaining and captivating from beginning to end. It is a fitting tribute to such an amazing man in film history.
Charlie Chaplin himself worried that time wouldn't be on his side, but I think as long as we keep The Little Tramp in our hearts, he will always be remembered. I will never forget him. Not just because his life was extremely interesting and he an amazing film maker and a genius of a man, but also because he brings so much joy to me and other people on the screen. All of his movies are on DVD so if you haven't seen any Chaplin, please hire "The Kid", "City Lights", "Modern Times" or "The Great Dictator" and find out why I have so much love for the man and the legend.  I can't wait to meet him in heaven and have a long conversation with him then! 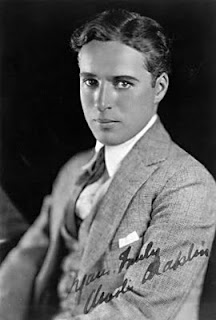