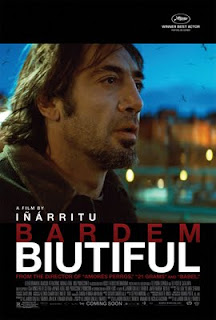 In My Own Words
When the lights went down for the 6:30 session of "Biutiful", the silence itself was almost deafening. When Javier Bardem's name appeared on the screen, my friend next to me held up her hands as if to applaud him. Without even seeing Bardem in "Biutiful" yet, you know it is going to be an absolute powerhouse of a performance.  Bardem himself is a fantastic actor and has proved this in many films such as in his Oscar winning role in "No Country For Old Men". However, I believe that it takes something very special to be nominated in one of the main categories of the Academy Awards for a non-English speaking film. Bardem was nominated for Best Performance by An Actor In A Leading Role for "Biutiful", not an easy category to be in contention for. When you look back at the performances which have been nominated for Academy Awards in the past which are not part of English speaking films, they are all truly amazing, unforgettable performances. Of course, all the performances which are nominated for the big awards are indeed noteworthy, but there are always some nominees which people find questionable. The nominees who are nominated for a foreign film and never questioned and always legitimate contenders. For example, Marion Cotillard in "La Vie En Rose", Penelope Cruz in "Volver" and Roberto Benigni in "Life Is Beautiful". The Academy recognises the performances in foreign films which are truly unforgettable and Bardem's performance in"Biutiful" is one of these.

Review
"Biutiful" is exactly as the name suggests, beautiful. It is not beautiful as in it's all rainbows and flowers, as it is quite the opposite. It is hard-hitting, but in a subtle way. It is unsettling, but not disturbing. It is an emotionally charged film with powerful performances so real that they make you truly believe that you are watching real life play out in front of you. "Biutiful" follows the last few months of Uxbal's (Javier Bardem) life as he dies from cancer. He decides against telling his family about his condition, and instead tries to make sure his two young children will have a good life once he is gone. Uxbal tries to make amends for his wrongs and to protect his children from their mother and his wife, Marambra's (Maricel Alvarez) self-destructive behaviour. On the road to his end, he is faced with more heartbreak and guilt than one should ever have to go through.

Javier Bardem is the star of this film and he is everything the lead of a film should be. He is in control of every scene he is in and carries the film perfectly. He is extremely likable and the audience can really sympathize with him. They feel truly sorry for him with the things he has to go through and all you want him to do is have a peaceful end to his life. "Biutiful" really tugs at your heartstrings as the performance by Bardem is so powerful. There is so much pain and suffering, but also love for his children shown just in his eyes throughout the film. A particularly memorable scene is when he comes face to face with his father for the first time in the morgue and the amount of emotions you realise that are passing through the character of Uxbal at that point in time is fantastic. Bardem is able to bring the character of Uxbal to life and completely embodies the character in a way which is seen extremely rarely.

"Biutiful" deals with some very confronting situations which will be very real to some people, but unlike most confronting movies, the confrontation is very subtle. The situations which the viewer is presented with throughout the film could be disturbing if they were done in a different way, but in "Biutiful" they are no so much. This is not to say that the filmis weak at all, but some of the things which occur stay in your mind after the film but don't make you feel uncomfortable. This is something quite extraordinary. Director Alejandro Gonzalez-Inarritu has really excelled himself by doing something like this which is basically unheard of. The musical score is also commendable. It adds to the tension of each scene and the score is actually quite selective. There is less backing sound than there is in a typical film, but the scenes which are backed by the score are the ones which really do benefit from it. There are no scenes that the musical score is part of that have it there just for backing sounds. Every scene which is included as part of the musical score is so because it is enhanced by it. The cinematography is beautiful and the editing is brilliant.

"Biutiful" is once again a time for Javier Bardem and Alejandro Gonzalez-Inarritu to shine. It proves that confrontation does not always mean having to make the audience feel uncomfortable, but this is something you may not realise until you see "Biutiful"
8/10