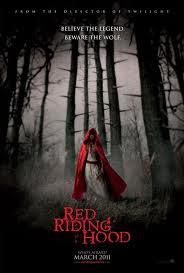 In My Own Words
Oh boy, I really wanted to like this movie. I love the idea of a dark take on a fairytale. There hasn't really been that many since "The Brothers Grimm" starring Matt Damon and Heath Ledger back in 2005. To tell you the truth, I don't know if there is any other way to do make a fairy tale into a movie these days than to do a dark take on it. Of course, to make a fairytale worth watching these days it needs to be somewhat different to the version we have heard hundreds of times since we were children. There are two such dark fairytale adaptations coming up in the future. "Sleeping Beauty" has been redone once again with Emily Browning in the lead and is set for release this year. However, this film won't be one you'll be wanting to take your children to see. In this remake, a university student find herself caught up in prostitution and other naughty activities. The other dark fairytale which is currently in pre-production is "The Brothers Grimm" Snow White", which is already gaining a tremendous amount of interest with it's recent casting news. Julia Roberts is to play the Evil Queen, Saoirse Ronan  is cast as Snow White and Armie Hammer of "The Social Network" fame is to play the Prince.

It almost seems almost as though the only people who can get away with making a traditional fairytale into a movie and doing it successfully is Disney, but even they don't do it as much these days as what they used to. They released "The Princess And The Frog" and "Tangled"  in two consecutive years, but upon release of "Tangled" they released a statement saying that they would be making no more princess movie.

Everybody loves a fairytale, whether in traditional style or with a twist. A twist creates a lot more interest these days though and doesn't seem to hurt at the box office as "Red Riding Hood" has shown. As we all know though, box office figures don't always point to a good film.

Review
Catherine Hardwicke knows she struck gold when she directed the first and best so far of the "Twilight" saga. After a three year break from feature film directing, she returns with "Red Riding Hood". The film's release was greatly anticipated, but the release fails to live up to expectations. "Red Riding Hood" is a classic example of how directors have a success and feel that they have to continue their success by trying to replicate their first success. The result is a film which seems like it is just trying too hard and is overdone in everyway. However, there is still something entertaining and suprising enough in the film to make it bearable. Amanda Seyfried is Valerie (Red Riding Hood), the small medival village girl who is betrothed to Henry (Max Irons) and in love with Peter (Shiloh Fernandez). Her village has a truce with a wolf who live in close proximately to her and her family, until the wolf strikes again after many years and kills Valerie's sister. The whole village is now in danger and the wolf specifically has it's eye on Valerie.

The main reason why "Red Riding Hood" fails is because it is trying so hard to be a dramatic historical horror film. It doesn't qualify as a horror film despite how dark the film tries to be because while being suspenseful, it really isn't that scary. The image of the wolf really isn't as threatening as one would expect it to be. The wolves in "Twilight" were scarier than this one! The film is suspenseful and actually succeeds more in being a thriller or a mystery as the ending is quite surprising. This is the best thing about the film and a film where you don't see the ending coming is more often than not a success. This film is a success in suspense and storyline, but weak in everything surrounding it. The cinematography and the way which the landscape is captured is really quite beautiful, although some scenes in the snowy village are quite clearly inside a set. The script is quite well written, but the way it is carried out on screen and directed is horrible.

The acting and chemistry between the actors is really quite atrocious. Amanda Seyfried isn't bad as Valerie and she was a good choice for the role. The character of Valerie is quite a dark character, never cracking a smile and extremely serious. She doesn't show too much emotion throughout the film, which she probably should have done more of in certain scenes. The chemistry between Seyfried and Shiloh Fernandez is really poor. These two have no connection with each other at all even in the most intense of scenes and physically do not look right together on screen. Fernandez's performance is also not anything to write home about. He was a horrible choice for the role and one might think that he was cast as the role of Peter just because his looks somewhat resemble that of the black wolf. Max Irons is nowhere near as bad as Henry showing the right amount of emotion at the right moments in the film. Gary Oldman probably gives the best performance in the film as Father Soloman, even though it is far from his best role. Again, the chemistry between Seyfried and Virginia Madsen who plays her mother, Billy Burke who plays her father and Julie Christie who plays her grandmother is almost non-existant in each case.

Looking back at "Red Riding Hood", it is so easy to see why there has been so many comparisons to "Twilight". The wolves, a girl with two boys after her and Billy Burke once again playing the lead character's father. The film isn't bad enough to miss altogether, but it is more worthwhile borrowing it on DVD when it comes out rather than make the trip to cinemas to see it on the big screen.
4.5/10