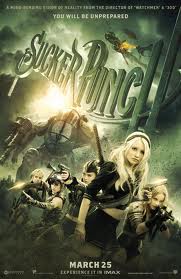 In My Own Words
Before I go any further, I would just like to clarify a few things about what I write on here. I've lately had a few people become confused with what "In My Own Words" is about. First and foremost, Movie Critical is a movie review site, but what distinguishes Movie Critical from other websites is "In My Own Words". "In My Own Words" is exactly as the name suggests, a place where I can talk about whatever I want that has anything to do with the movie I am about to review. I may want to talk about the actors and what they do outside their acting roles, I may want to talk about the location of the film or I may want to talk about my personal experiences with the film.  It is not the review itself. The "Review" section is where I critically evaluate the film and I focus only on what is featured in the film. So Movie Critical is two things, it is an honest and personal opinion on anything I feel like talking about which has anything to do with the film I am reviewing and it is also a critical film review. I don't think it's the right thing to do to talk about such things as what goes in the cinema or what type of cinema I go to in a movie review, and it isn't right to talk about the actors personality or personal life in a review where you should only by talking about their performance in that movie.

Now that we've got that all cleared up, here is my review for a movie which I was really looking forward to, but.......

Review
"Sucker Punch". The film that is a public relations dream. If you haven't seen the anime styled posters with images of "Sucker Punch's" leading ladies in battle all over your city, you must have been living under a rock for the past month. An action film with entrancing computer generated images crossed with the theme of freedom against oppression with some of the hottest young female stars in Hollywood today. You would love to do the marketing for this movie as there is so much you could do and it opens the action genre up to another target audience of young females. So much marketing potential, so much potential as a film. A film that before it's release date was hailed to be Zack Snyder's "Inception". So what happenned? Both too much and not enough. "Sucker Punch" lacks in the areas that matter and has too much going on at the same time.The concept is great and it could have been a masterpiece, but Snyder has just got too caught up in what he could do rather than what he should do.
"Sucker Punch" opens with a music video like montage  of the recent events in Baby Doll's (Emily Browning) life involving the death of her mother and the accidental shooting of her younger sister which have landed her in Lennox Hall Institute for the Mentally Insane. Baby Doll overhears the head of the institution, Blue Jones (Oscar Isaac) tell her stepfather (Gerard Plunkett) that the High Roller will come in a few days to perform a lobotomy on her. She plans to escape from the institution before the High Roller comes and in doing so, creates an alternate battleground in her mind in a world where dragons, ogres and samuari giants fight with her and her fellow inmates Sweet Pea (Abbie Cornish), Rocket (Jena Malone), Amber (Jamie Chung) and Blondie (Vanessa Hudgens) to seek out their freedom.

"Sucker Punch" could have well been a cult classic. The visuals, the action sequences,  the soundtrack and the five " no nonsense" lead females have everything that a cult classic would. The first area that "Sucker Punch" fails in is the script. It contains several bouts of surrealism in which Baby Doll creates parallel universes in her mind. She imagines that the institution is a brothel and her and the other girls are it's star dancers and from here she imagines the battleground inside her head. On paper, the idea isn't so bad, but played out on the screen it just doesn't work. It can be downright confusing at times. Even when you finally get a grasp of what is going on, there is no real feeling of suspense or urgency. The jumping back and forwards between the universes in Baby Doll's mind makes the film seem uneven and too jumpy. There is no smooth flow at all through the film which makes it just feel like a big mess. Of course, the film does have it's impressive graphics and action sequences going for it. The most impressive being that of Baby Doll's first venture into her imaginary battleground where she arrives in a Japanese temple setting in the middle of a snowfall, which is really quite beautiful. The soundtrack of the film is also fitting to every scene.

As for the acting, weren't these girls supposed to be in an institution for the mentally insane? Yes, Baby Doll's mind transforms the institution into a brothel, but shouldn't these girls have more eccentric personalities either way? They just all seem a little too much like your average teenage girls, with the exception of the first scene when Baby Doll first arrives at the instituation and we see the theatre for what it really is. The characters would have definately been more interesting if they had contained some of the characteristics from the girls we had seen in the first seen. Otherwise, they really don't have much character at all. The only two actresses who give performances which are noteworthy are Abbie Cornish and Jena Malone, who play sisters Sweet Pea and Rocket. They don't go the full haul with their characters and take them to the limit so that you can really feel connected to them, but they still have more character than the others. Abbie Cornish could have been a bit stronger in the scenes where she is trying to show her power over Baby Doll, but in two particular scenes (which cannot be given away as they will spoil the film for those who want to see it) she is superb. Jena Malone is also very good in the role as the younger and somewhat positive sister. Emily Browning is just dull in her lead role. She does not change her facial expression throughout the whole film and it is confusing to see how such a weak character in personality could be such an influence to these other girls. Vanessa Hudgens doesn't do too badly in this film when you compare her to her "High School Musical" days. She certainly has grown up and has shown she can do more than sing and dance and can hold her own without Zac Efron on her arm. Yet, her character really doesn't have much to it and we really have no idea who Blondie is. The same can be said for Jamie Chung's character, who is Amber?

We could sit here and talk about what "Sucker Punch" could have been all day, but the fact is that it wasn't. It is flat and messy. Action fans may enjoy it for Baby Doll's war sequences and young teenage boys may enjoy it for seeing the girls in short skirts. One of the year's biggest disappointments, if not the biggest.
4/10