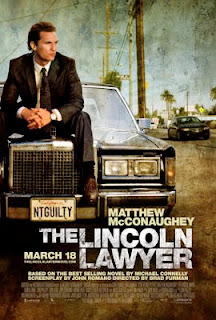 In My Own Words
Finally, another Michael Connelly novel has been made into a movie! This could well be a very self indulgent "In My Own Words" as I am a big fan thriller books written by such authors as Michael Connelly. To my despair, this is only the second Connelly book to be made into a movie. The first one was "Blood Work" which was directed by and starred Clint Eastwood in 2002. My personal favourite Connelly novel is "The Poet". I would love to see this book made into a movie. Is it just me or does it seem like the 1990's and early 2000's were a popular time for adapatations of thriller novels from the likes of John Grisham and other authors such as Jeffrey Deaver and Connelly? It has been awhile since we have had an adaptation like this. I miss them. Well, I miss the ones that are done well. "The Lincoln Lawyer" has proven to be a good relief from that. It encourages me to go and read more thriller books as well. Some people hate them because they give them nightmares. Don't get me wrong, they do also give me nightmares, but I love nothing better than guessing till the end.  Also, it takes a great amount of intelligence and research to write a thriller book so I greatly respect the authors of these books who do what they do so well.

Review
Finally, a good lawyer, courtroom thriller that is completely and utterly worth watching. "The Lincoln Lawyer" is a return to form for the genre and also for star Matthew McConaughey. Based on the Michael Connelly novel of the same name, "The Lincoln Lawyer" brings back the intelligent and suspenseful crime dramas and makes them once again entertaining and impressive. Mick Haller (Matthe McConaughey) is the Los Angeles lawyer who would rather work out of his Lincoln than out of an office like a normal lawyer. He is approached to represent clean cut Louis Roulet (Ryan Phillippe), who insists he is being set up by a woman who claims he has raped and violently assaulted her. Haller quickly finds out that he may not be representing as innocent a man as Roulet makes himself out to be. He finds himself in a place of guilt and confusion while trying to do what he is being paid for, but not holding any confidence or trust in his client.

Matthew McConaughey has an incredible return to form and this is his best role to date. McConaughey has shown in the past few years that he can do the action and fluff comedy roles with complete ease and do them well, but this role brings out in him what we all knew he had the potential for. McConaughey shines in this role. He is the primary focus and backbone of this film. He is perfect in this role and perfect in every scene. McConaughey completely becomes Haller and is completely likable, no matter who cocky his character can be at times. His character development is also wonderful. We have a complete sense of who Mick Haller is, where he has come from and what are the things that matter to him. He is a complete joy to watch.

The film is extremely well made. It captures the true essence of the rough around the edges Los Angeles of today and there is no mention of the Hollywood or Disneyland magic which the media loves to portray Los Angeles as being, which makes the film feel so real. The soundtrack and score is perfect for every scene and adds to the charm of the film. The cinematography is also perfect for the type of film which it is. The script is clever with some very witty banter between the characters. It is so great to see a film which is is story driven and character driven at the same time and is so successful at each.

Marisa Tomei is also commendable as Haller's " on again off again" love interest and mother of Haller's daughter, Maggie. She shows her versatility as an actress as all in the same role, she plays the doting single mother who's aim is to protect her daughter, the hard working and ruthless business woman and also the woman with just enough flirtation and femininity to make her completely desirable. Ryan Phillippe is fine in his role as Louis. He is great in some scenes and in some scenes it feels as though he just isn't believable in the part he is playing. Michael Pena is actaully fantastic in his smallish role as Haller's ex-client, Jesus Matinez. Not quite as believable is Margarita Levieva, as Louis' victim, Reggie. One would expect her to be slightly more emotional when on the stand talking about the night she was badly beaten while on the job.

Overall, "The Lincoln Lawyer" is a complete success and the role that Matthew McConaughey was always capable of doing while he was wasting his acting talents on other roles of lesser value. Director Brad Furman should be very proud of his achievement.
8.5/10