There is one simple way to determine if you are a fan of The Great Gatsby. It's by whether you are a Baz Luhrmann fan or if you are not.

The Great Gatsby is Baz Luhrmann's most ambitious and extravagant film yet. Luhrmann has an unmistakable style to his films and if you are not a fan of his past films, in particular Moulin Rouge!, there is little chance that you will enjoy The Great Gatsby. On the other hand, if you are a Baz fan, then you will think that this film is one of the events of the year. That being said, for it to really have been one of the events of the year, The Great Gatsby would have to have broken down the barrier between the two and that's something it failed to do. 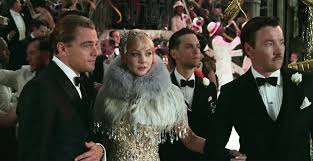 Based on F. Scott Fitzgerald's classic novel, The Great Gatsby is told from the viewpoint of young bond worker, Nick Carraway (Tobey Maguire) who moves to New York and into a cottage on Long Island. He quickly becomes enchanted by the extravagant lifestyle of his cousin, Daisy (Carey Mulligan) and her husband, Tom Buchanan (Joel Edgerton). When Nick finally meets his enigmatic neighbour, Jay Gatsby (Leonardo DiCaprio), he finds that below the surface nothing is as it seems.

Luhrmann's version of The Great Gatsby is extremely over the top. That has always been his style, but this film seeks to overemphasise parts of the story which don't need to be as they already create an impact naturally. The moment when Gatsby is introduced into the film is so over the top. DiCaprio doesn't need fireworks placed around him for his entrance into the film. That's enough to provoke a sea of eye rolls. 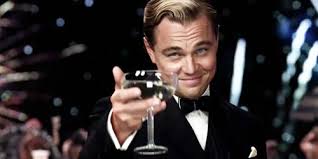 Even though it is extremely over the top and there is a lot of the film that visually seems unnecessary, you can't deny it is also visually stunning. The party scenes are incredible as are the recreations of 1920's New York City. All of the costumes for the players are also incredible, Carey Mulligan never looks less than a million dollars.

Luhrmann also is very good at employing the best choreography for the party and club scenes. It almost makes you want to learn the Charleston. It can be a little too neat at times when it is employed for butlers opening and closing doors in time with each other at the Buchanan's house, again unnecessary. The musical score is also very good. It is a risk to mix modern music with a historical picture, but it does The Great Gatsby justice.

One thing that everyone will agree on is that through the exaggeration and the extravagance, Luhrmann does make sure that the film stays true to Fitzgerald's novel the whole way. He may let the cinematography run away with itself, but the story stays on it's path.

There could not have been a better person to play Gatsby than Leonardo DiCaprio. He is everything Gatsby should be and is consistently good. His most wonderful scene is when his Gatsby catches sight of Daisy for the first time in years and you can see all his love and pain in his expression in such a pure way. Carey Mulligan is also a very good Daisy Buchanan. It is wonderful to finally see her smile in a movie again.

Tobey Maguire is good as Nick Carraway, but is overshadowed by his fellow players in many of his scenes. His best comes at the end of the film. Joel Edgerton is also brilliant as Tom Buchanan, and also quite intimidating.

The Great Gatsby is not going to be for everyone. It will be for those who crave visual extravagance and love experiencing how the other half live.


You may have also seen Leonardo DiCaprio in.....
Inception as Cobb
Django Unchained as Calvin Candie

You may have also seen Carey Mulligan in.....
An Education as Jenny
Drive as Irene

You may have also seen Joel Edgerton in.....
The Waiting City as Ben Simmons