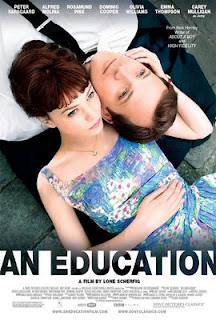 In My Own Words
Tonight I finally got to see the performance of Carey Mulligan in “An Education”, a role that has had many people suggesting that an Oscar nomination is well on its way. Miss Mulligan is one of those stars who has had a solid acting career, yet has not found actual stardom outside the UK until now. It has been a big year for her with the release of “Public Enemies” and “An Education”, and the release of “Brothers” not too far away. The hype is true, she really is brilliant in this film and steals the show.

I really enjoyed this film. It may be a movie more for girls than boys, as it is a coming-of-age drama about a young girl, and addresses issues that young girls faced pre-feminism. The movie also makes you realize how important education is of any kind, whether it be through school books or through enriched life experience. The movie is based on Lynn Barber’s memoir, but there are quite a few things changed in order for it to work on the big screen, and these changes worked well. The film is moving, entertaining and, dare I say it, educational. It seems like a while since I saw a film at the cinemas which really made me happy to watch and observe all the wonderful things about it. I would be absolutely delighted to see this film and Mulligan considered for Academy Awards come 2010.

Review
“An Education” is based on the memoirs written by Lynn Barber and written for the screen by Nick Hornby, writer of “About A Boy” and “High Fidelity”. Jenny (Carey Mulligan) is a bright sixteen year old whose parents (Alfred Molina and Cara Seymour) have high hopes for her to attend Oxford. Although Jenny does see Oxford in her future, her mind is also consumed with her cello and everything French. Her life is turned upside down when she accepts a lift home from the charming David (Peter Sarsgaard). David, although 15 years her senior, takes her to fancy restaurants, away for weekends in the country and concerts, all the while completely charming and winning over her parents and making Jenny fall in love with him and her world. Before long, Jenny starts to notice that there are many questions that have gone unanswered about David’s world and that she may well need to choose between David or her dream of Oxford. Like many other teenagers on the verge of adulthood, she also realizes that her parents may not always know best.

Although this movie may sound like much like a typical teenage drama, it is presented far from it. It shows the transformation from a young schoolgirl into a woman of the world in a very grown up way, thanks to both fantastic direction from Lone Scherfig and amazing performances by the cast. Scherfig captures the 1960’s in a perfect manner and chooses a perfect soundtrack to back up what is happening on screen. The cinematography is amazing, such as the camera angles and shots. The choice of camera angles on Jenny help support her personal journey by showing her changing persona. However, the ending of the film may not be suited to everyone’s taste. Some people may feel satisfied with it while others may be left feeling as though the movie ends flat.

The best part of the film is defiantly the performances by the cast. Mulligan is the star of the film. As Jenny, she is charming, likeable and a joy to watch. She perfectly transforms from a young schoolgirl to a woman, whilst still regaining an air of youth and also naivety. Although in real life Mulligan is actually 24, you would find this very hard to believe when watching her on screen. Alfred Molini is also a stand out as Jenny’s father, who is protective of her and concerned about her future. Rosamund Pike, who plays David’s friend and Jenny’s some-what mentor in David’s world Helen, is also praise worthy. She supplies lots of humorous moments to the film and is an audience favourite. “An Education” also features Emma Thompson as the disliked headmistress of Jenny’s school and Sally Hawkins, star of “Happy-Go-Lucky”, also makes a cameo.

“An Education” is a beautiful film which contains both humorous and dramatic moments. The film and its cast are definitely of the Oscar caliber and it is worth seeing on the big screen to grasp the full emotion and strength it generates.