The Invention Of Lying 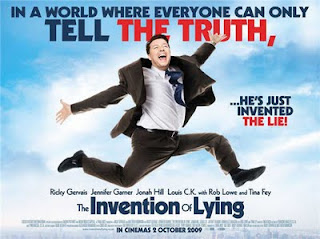 In My Own Words
The main reason I wanted to see this movie was to see one of my heroes, Tina Fey back on the big screen. All five minutes of her on screen it turned out, but I knew I wouldn’t mind watching Ricky Gervais once again, especially after his hilarious performance in “Ghost Town” last year.

It turned out that this review was going to be one of the harder ones to write, which I was totally unaware of before I went to see the movie. The reason being is that I am a Christian, and this movie does poke fun at religion, especially aspects of Christianity. I know some people who would take offence to most of the second half of the movie. I was a little offended, but I tried not to take it too seriously. The movie in itself is a story, it’s not a story that is meant to be taken literary. That is the way I looked at it anyway. Although, unlike most comedy movies of its kind, it will evoke many a conversation between people who go to see it afterwards. Some people may think it makes some valid points about religion (if you are atheist anyway) and some people may think that it just makes some valid points about human nature and existence. I did think that it made some valid points about the latter, which I definitely did talk about after the movie over dinner.

Review
“The Invention Of Lying” is the motion picture directorial debut from British comic, Ricky Gervais. Mark Bellison (Gervais) is a single, lonely man living in a world where everyone tells the truth, and it is inconceivable to speak of what isn’t. When things are at their very worst for Mark after being rejected by Jennifer (Jennifer Garner), losing his job and being told he is being evicted from his apartment, he finds that he is able to lie, and because nobody else in his world has ever lied before, he can finally live the life he has always dreamed of. He find that by lying, he can not only make his life better, but he can also make life better for other people. However, he finds even though lying can initially have benefits, those benefits do not last.

The film is quite clever and very well written, as one would expect from Gervais. There are some great laughs in the film, especially in the first half. The concept of a world where no one lies is more like a world where everyone says it as it is, rather than just telling the truth. The folk in this town that the movie is based in reveal all their thoughts when they talk each other, such as people waiters telling patrons that they are embarrassed to be there and how they want to ask a girl for her number. The people can come across quite rude as a result, but that adds to the humour. Gervais is hilarious in his role as Mark, while it is not Garner’s best role. She comes across as weak and at times, very annoying. The film is packed with cameos such as Tina Fey, in a tiny role as mark’s secretary and one that does not seem to fit her after becoming familiar with her as television show producer Liz Lemon in “30 Rock”. Philip Seymour Hoffman makes a hilarious cameo as a bartender, as does Jason Bateman as the doctor.

This may not be a film for everyone, particularly those who are religious, as during the film, there are references to religion and its origins not being true. However, there are quite a few holes in the story as a result of this. Of course, the idea of no religion in the world of the world in non-existent, but this is not supposed to be a true story. There are also references to marriage before there is any mention of the “Man in the Sky”, and marriage is considered an institution related to religion, in many cases anyway. So some people may want to avoid the movie for this reason, but the movie, just like the things Mark says in the film, is just a story and should not be taken seriously. Particularly as it is a comedy movie. The movie does have some morals that should be taken home in it and even though it pokes fun at religion at times , it does also make some good points about how religion can do good in society and peoples lives.

This film may not be for everyone for the above reason, but it has got some very funny moments in it. The jokes tend to get less funny towards the end of the movie, but the first half will give the audience loads of laughs.