The Imaginarium Of Doctor Panassus 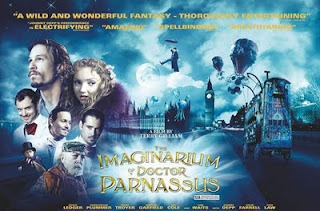 In My Own Words
Another movie I had the pleasure of seeing for free as I also won tickets to this! I did not know much about this movie when I walked into the cinema. All I really knew about it was that it was a fantasy and that it was Heath Ledger’s last movie. This fact in itself will draw crowds to see it. The movie itself, I found interesting. It was one of those movies that I go home and look up information about, particularly about how the film managed to be finished without one of the main characters. From doing this, it was easy to see how the films opening was a great deal delayed. The script had to be rewritten and Johnny Depp, Jude Law and Colin Farrell had to be brought in. I won’t go into the reasons why these actors were brought in, as it would definitely contain spoilers for those who plan to see the movie. However, it is admirable that this movie was finally released, as many movies become unfinished projects when one of the leads dies in the middle of filming. For example, 1962 movie “Something’s Got To Give” remains unfinished due to the death of Marilyn Monroe.

I’m glad I saw this movie, as it is not often a movie comes out like “The Imaginarium Of Doctor Panassus”. It was something different and although not a movie I would go out and buy on DVD, was a pleasant watch. However, it is slightly odd, or very odd, depending on what you are into.

Review
“The Imaginarium Of Doctor Panassus” is a clever, visually stunning fantasy movie, that some will adore, but it will also seem a little too far fetched for others. If you enjoy films that combine the modern world with fantasy without crossing over into the sci-fi genre, this movie may well be for you. While fantasy fans will flock to see this film, so will many others just to watch Heath Ledger in his last performance on the big screen. “The Imaginarium Of Doctor Panassus” is all of these things... a Heath Ledger tribute, stunningly beautiful and completely and utterly bizarre.

Thousand year old story-teller and imagination guider Doctor Panassus (Christopher Plummer) is the leader of a travelling sideshow in modern times, which is extremely unsuccessful. As a result of a wager he made with the devil, Mr Nick( Tom Waits), sixteen years ago, he is in danger of losing his beautiful daughter, Valentina (Lily Cole). A new wager is set up to see who gets to keep Valentina, both Mr Nick and Doctor Panassus vie to be the first to collect five souls in the Imaginarium. With the appearance of a mysterious stranger, Tony (Heath Ledger) the competition turns out to be more than what everyone involved has bargained for. “The Imaginarium Of Doctor Panassus” is very slow to begin with, but speeds up in the second half to the point that it is almost going too fast. The story gains momentum and becomes intriguing in the second half, thanks to the entrance of the Imaginarium in the film. The visuals created for the Imaginarium are amazing, and are likened to a cross between the visuals in “Lord Of The Rings” and “Corpse Bride’, beautiful yet dark. Even the stage for the Imaginarium is beautiful and vintage, as are the costumes used for Doctor Panassus and his troop.

The first image of Ledger in the movie is almost spooky, like seeing an image from beyond the grave. It is an extremely different role to the ones in which Ledger was known for, although it isn’t too far removed from the Joker in “The Dark Knight” in some sequences. It is a fitting farewell to the Australian actor, and a fun and pleasant last role for fans to remember him by. The role of Doctor Panassus, as played by Plummer, is supposed to be of a role in which people feel sorry for and connect with. However, he just comes across as a drunk who doesn’t show much feeling until the very end. Perhaps the best performance in the movie is by model turned actress Lily Cole. Her portrayal of the young and naïve Valentina show both the strong and weak sides of her character. Valentina is both a temptress and a child and Cole is perfect in the role. She shows how she has made the successful transition from model to actor and has a promising acting career ahead of her. Johnny Depp, Jude Law and Colin Farrell’s roles are more like cameos, there in place of Ledger. Their roles are, however, not clearly defined, and are more like talking points for the audience to decode and come to their own conclusion about what they mean after the movie.

As mentioned, it is a great story and very clever. The writers did a great job of reassembling the script after the shock of having one of the major stars die. One would have to imagine what their Imaginarium would be like. However, much of the film is not thoroughly explained and can be confusing. It is not a realistic movie at all, which is inevitable of it being a fantasy film, but it can come across as extremely bizarre. This degree of strangeness will be a reason why people both love and hate the film.