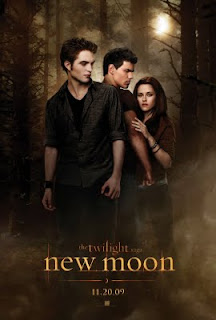 In My Own Words
Here it is, the awaited follow up to “Twilight”. Well, it will not have been awaited if you are not a Twilight fan and the first thing I will say about this movie before I tell you my own thoughts and my experience with this movie is that this movie is NOT for you if you are not a fan of Twilight. My boyfriend who followed me along for the special midnight screening gave it a 2/10, he was not impressed. I, myself, have tried not to become part of the “Twilight” phenomenon, but I have been drawn in, more by the books than the movies though. I did enjoy “Twilight” when that came out at the cinemas last year, I thought it was enjoyable. Sure it wasn’t the best movie ever made and does not rival “Gone With The Wind”, but it was fun to watch nevertheless.

My boyfriend bought tickets for me for the midnight screening at my local cinema as I wanted to review it before the majority of the world. Also I had never been to a midnight screening of anything so it was very exciting! Although I did go to the 9am first screening of “The Lord Of The Rings: The Return Of The King” when that opened, but this was a bit more exciting at night for some strange reason. I was shocked, I have never seen my local cinemas so packed. They had six cinemas all sold out, all by people (mostly girls) under the age of 25. It can be hard to take a movie seriously when you have some groups of girls showing off to their friends by laughing at parts in the movie which aren’t even funny and are supposed to be serious. That was something that I was prepared for though.

So, as far as the film went, not as good as the original “Twilight”. Nowhere near as cheesily enjoyable as it was. And I repeat, stay away from this movie if you do not like “Twilight” at all, it won’t change you mind. However, if you are a “Twilight” fan, it is still worth seeing and you may find some happiness and enjoyment seeing Edward, Bella and Jacob on the big screen again.

These are my own words and this is my review.

Review
There is no escaping the “Twilight” phenomenon, especially leading up to the release of “New Moon”, the second installment of the saga. The film, whether it is good or not, will make millions worldwide in the box office from fans going to watch it numerous times. However, movie goers who go to watch the film who either did not like the first film or didn’t see it, will be completely dissatisfied and confused. The movie makes no sense without the first film and will not appeal to those who are not fans of Edward and Bella to begin with.

In the second film, eighteen year old Bella Swan (Kristen Stewart) and her vampire boyfriend, Edward Cullen (Robert Pattinson) have carried on their relationship despite their differences and the fact that Bella was nearly killed by a fellow vampire in the previous movie. After another close call, this time with members of the Cullen family, Edward decides that it is best for him to leave Forkes and Bella. Bella is left heartbroken and finds comfort in her friend, Jacob Black (Taylor Lautner). However, she then finds out that Jacob has a secret of his own. Jacob, despite his feelings for her, does not fill the void left in her heart by Edward. The film will delight Twilight fans. It stays true to the book and makes the most of each of the main characters.

However, as a stand alone film, it fails. As it is the follow on to “Twilight”, there is really no character development or explanations as to why things are happening in the film. The actors make the most of their roles, and make all there is to make out of their characters. Stewart can be painful sometimes as the emotional Bella, but that is the way that Bella is written in Stephanie Meyer’s book and plays the part perfectly when compared to the literature Bella. Pattinson and Lautner’s performances are not spectacular, but do not do a bad job. Ashley Greene’s role as Alice Cullen is probably the most interesting role and has the most variation to work with. However, it is not until the end that Dakota Fanning and Michael Sheen show up and their roles are both rushed and almost non-existent.

The change of director for this movie does not work well for the saga. Weitz does not do the film much justice and one can only hope that the change of director to David Slade for the next film, “Eclipse” will be advantageous. However, the visuals of Forkes are stunning, even though it was filmed in Canada. The soundtrack is also fitting. It is just a shame that there is no suspense and complete predictability throughout the whole film to overshadow it.

Again, avid “Twilight” fans will still enjoy the film and there is no doubt it will be one of the biggest box office hits for the year. The movie unfortunately does not live up to the hype and the spectacle is greater than the film itself.