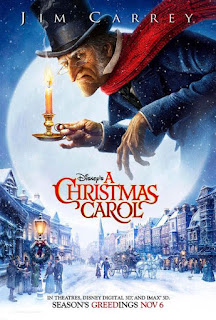 My Own Words
Welcome to Christmas! That’s what I saw this movie as representing. The start of the Christmas media season. I’m actually surprised it wasn’t released at the beginning of December rather than the beginning of November.

Anyway, I was very excited about seeing this movie. I love the story of “A Christmas Carol”, although, sadly, I have never read the book. I really should get around to that one day. There have been over 35 films based on Charles Dickens novel. However, I have only seen two of them. Those being “Mickey’s Christmas Carol” and “The Muppets Christmas Carol”, both of which I love. This version which I saw tonight, was a very different interpretation. In saying that though, I did really enjoy it and thought it was a great movie.

The one thing I have to say about this movie and is a bit of a warning to parents out there or people who were contemplating taking children to see this, it is not as child friendly as it appears. There are some pretty frightening parts in it for children. One of my friends took her three year old to see it the other day and as she was buying the tickets, the attendant told her that if the movie gets too scary for Bailey, feel free to bring him back out and she will refund her money. Apparently this had been the case with quite a few small children. But little Bailey soldiered on. He apparently got scared in a few bits, but was happy to stay until the end. In other words, “A Christmas Carol” is more of an adult animation. There were even bits I thought were a bit too full on!

Review
The latest interpretation of Charles Dicken’s masterpiece, “A Christmas Carol” comes at the hand of Robert Zemekis. The new, animated version of the timeless classic is beautifully made and is an extremely unique interpretation that still remains true to the original story. It exhibits how much computer generated animation can now achieve and is truly impressive.

For those that don’t know the story, Ebenezer Scrooge( Jim Carrey) lives a lonely life consumed by his wealth and greed. On Christmas Eve, he is visited by his past and long dead business partner who informs him that tonight he will be visited by three ghosts, the Ghost of Christmas Past, the Ghost of Christmas Present and the Ghost of Christmases Yet To Come. This version is quite dark and at times, can be disturbing. Although it is by the Disney company and looks harmless enough, it is definitely not a children’s movie. There are several images that would not seem out of place in a horror movie in terms of their fright factor, especially those of Jacob Marley.

However, the images, gruesome or not in some parts, are amazing. This film is definitely a credit to Zemekis and his direction. It is clearly obvious on screen who Jim Carrey is, as well as Gary Oldman in his portrayal of Bob Cratchit and Colin Firth as Scrooge’s nephew, Fred. Carrey’s Scrooge is extremely well constructed as it shows his sadistic and pessimistic nature right down to the tiniest detail, and the changes throughout the movie to the character are well portrayed. Even though it is animation, it is still very easy to pickup on Carrey’s mannerisms and facial expressions. Credit must be paid to him for portraying an old man so successfully, even if it is in animation!

The only criticism with “A Christmas Carol” is that it can feel in some sequences that Zemekis is trying to show off the amazing things that animation is able to do these days. This can lead to some sequences being longer than they have to be. However, in saying this, these sequences are still beautiful and it is indeed amazing what animation of this kind can do nowadays. Otherwise, it is extremely hard to find another criticism for this movie. It is a movie that everyone should see before Christmas and is likely to get you in the Christmas spirit. Just don’t expect it to be light and fluffy because it is clearly not a happy Christmas movie for the majority of the film. The film is dark, but it is still incredibly beautiful and a great version of a classic using modern technology.