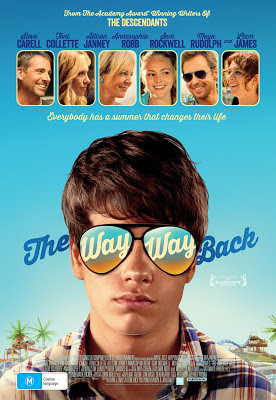 Year: 2013
Director: Nat Faxon and Jim Rash
Cast: Liam James, Toni Collette, Steve Carell, Sam Rockwell, Alison Janney, AnnaSophia Robb, Amanda Peet, Rob Corddry, Maya Randolph
Screening at the Sydney Film Festival on the 6th and 10th of June. Please see official website for more information on times, venues and tickets
Now showing at cinemas in the USA, opening in the UK on the 28th of August 2013
To be released in Australia on the 1st of August 2013

The Way, Way Back is the first comedy this year to really break the mould and produce something that is genuinely and effortlessly funny.

First time directors Nat Faxon and Jim Rash (who also star in the film) have written a wonderfully sweet and clever script that is truly hilarious.  The Way, Way Back is very entertaining and never dull with colourful performances and brilliant dialogue. It is intelligently funny, yet simplistic and uplifting in the way all feel good films should be.

We meet fourteen year old Duncan (Liam James) when he is on his way to the beach house which he will spend his summer at with his mother Pam (Toni Collette), Pam's boyfriend Trent (Steve Carrell) and his moody teenage daughter, Steph (Zoe Levin). Duncan struggles not to be awkward in the situation which he clearly feels uncomfortable in. He escapes his family by venturing to the town's water park and befriending owner, Owen (Sam Rockwell). In the water park, he finds a place where he can truly be happy and enjoy being himself.

This coming of age story is really one of a kind. It is not all smooth sailing and people get hurt and emotions shattered along the way. However, you still realise when leave the cinema that even though the world can bring you down, if you step outside your house there is a place out there where you can be yourself and find happiness with people who appreciate you for you. The Way, Way Back leaves you with a smile on your face and even though there are sad moments, you remember the film for the happy ones. It reminds you how there is still beauty in the world just outside your front door if you can't find it behind.

It is fantastic to finally see a comedy that relies so much on the dialogue. There are so funny antics, but the majority of the laughs come from what the characters say. Unlike many other comedies in this day and age, this film does not feel the need to use filth or sexual jokes as the basis for it's comedy. It is just good, clean comedy that is very witty and entertaining.

The majority of the laughs come from Sam Rockwell's Owen and Alison Janney who plays next door neighbour, Betty. As soon as Janney appears on the screen she starts prompting fits of laughter and Rockwell's comedic timing is amazing. These two are the two runaway stars of The Way, Way Back. 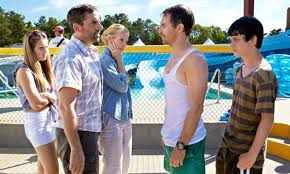 Liam James does well. He is so painfully awkward that you want to shake it out of him as his awkwardness gets to be a little too frustrating at times. Toni Collette is so very sweet and completely likable. You instantly start feeling sorry for her when things start to go haywire. It is very interesting seeing Steve Carell as the bad guy. No one would expect him to be the one in the film who has supplies next to no laughs. Yet, he still pulls it off well and is provokes dislike from the viewer, which is what he is expected to do.

AnnaSophia Robb is also right on the mark as Betty's daughter and Duncan's new found friend. She is also a very interesting character to watch. May Randolph plays water park employee, Caitlyn and has her fun moments too. Directors Faxon and Nash are also great in their roles, particularly Nash who is dryly hilarious.

The Way, Way Back's water park provides the perfect backdrop for this fun and entertaining film.  Like a waterslide, you come away smiling and thinking about how much fun you have just had.

On a side note.....
Movie Critical were able to attend the Australian premiere at the State Theatre for The Way, Way Back at the Sydney Film Festival last night. We were present on the red carpet to witness the beautiful Toni Collette arriving in style.

There was also a very special guest who surprised Collette on stage while she and festival director, Nashen Moodley were introducing the movie. Steve Carell, who was in Sydney for the premiere of Despicable Me 2 arrived just in time to introduce the film. It was an amazing start to the film, with the audience buzzing from seeing these two Hollywood superstars on stage.


You may have also seen Steve Carell in.....
Date Night as Phil Foster
Despicable Me as Gru

You may have also seen Toni Collette in.....
Hitchcock as Peggy Robertson

You may have also seen Sam Rockwell in....
Iron Man 2 as Justin Hammer
Cowboys & Aliens as Doc