Cowboys And Aliens- The hybrid you never though you would see, but doesn't matter if you don't 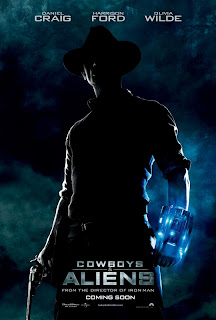 Cowboys And Aliens
Year: 2011
Director: Jon Favreau
Cast: Daniel Craig, Harrison Ford, Olivia Wilde, Sam Rockwell, Paul Dano
In My Own Words
Genre hybridity. It makes all things possible.
I first learnt about genre hybridity, which in colloquial terms means when a film belongs in two sections at the DVD store, in the basics of film studies at university a couple of years ago. A classic could be a comedy or a drama, a drama could also be a thriller and a western could also be an action.
But a western being a hybrid with a sci-fi? That example was never in Film Studies 101!
The interesting thing about Cowboys and Aliens is that I truly believe it couldn’t have been made any time before the 21st century. The special effects that were available before this period in time would not have been adequate to make this film anything but a B grade film. Could you just imagine John Wayne on his horse with a UFO on a string behind him?
The CGI available now to film makers who have the major bucks to use the top equipment makes this hybrid actually work. Sure it is not the most realistic concept, but when was a sci-fi ever realistic? You have to admit, the concept is kind of cool. This is probably the only time you will ever see western and sci-fi fanatics unite in the same theatre for something which a film which is right up both their alleys.
These are my own words and here is my review.
Review
Cowboys And Aliens? Many would have thought that Jon Favreau was headed for disaster just with a film concept like that, but hey, there’s no reason that aliens exist they didn’t do so in 1873 in a small town in Arizona!
Yet, pulling off a somewhat complicated genre collision doesn’t mean a great movie is created. Favreau obviously needs to be complimented for taking on such an adventurous project and pulling it off, but…..you can’t have any sort of a good action film with no suspense.
A cowboy (Daniel Craig) wakes up in the middle of the desert with no recollection of who he is or where he has been, but with a strange metal bracelet around his wrist. He stumbles into the small town of Absolution, which has trouble written over it. However, the trouble soon doesn’t just involve cowboys and outlaws and barmen. Absolution is being targeted from the night’s sky as well.
Cowboys And Aliens is a passable film. The pros and cons are equal with each other. The major pro is that the film is that visually the film is pretty amazing. The special effects are very well done and the western landscape and the town of Absolution are exquisite.
Another great thing about Cowboys And Aliens is that it stays true to both of its genres. There are the right signs there for a western such as the old western bar, shoot outs and the music that would accompany a western. And then there is obviously the signs of the sci-fi, which are aliens and advanced technology far beyond the comprehension of those who come to encounter it. It is a very successful meshing of genres.
However, the big downfalls of Cowboys And Aliens are that it is not suspenseful at all and the middle of the film is really quite tedious. It is very hard to remember what happened in the film between the initial attacks of the aliens and the finale. And if it is hard to remember, one can only conclude that it was boring and nothing really happened. As a result of this black hole, the film is just very slow and there is no urgency or suspense as to what will happen.That’s never a good thing to hear about a film.
Favreau cast his characters well. Each of the major actors is perfectly at home in a western. Daniel Craig pulls off the mysterious unidentified cowboy well. There isn’t too much emotion there in the moments it is warranted, but the majority of the time emotion is not really needed with his hard-front character. Harrison Ford is just a veteran of adventure films, so here he is in his element. Another hard fronted character which Ford really has no problem doing.
Cowboys And Aliens show that these days any genre hybrids are possible, but they don’t ensure a complete success as a film.
5/10