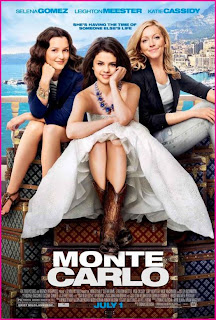 Monte Carlo
Year: 2011
Director: Thomas Bezucha
Cast: Selena Gomez, Leighton Meester, Katie Cassidy, Cory Monteith
In My Own Words
Some people refuse to see movies in the school holidays because of the havoc that occurs in the cinemas throughout that period. However, I find it quite an opportunity for interesting observation really.
So my first movie to watch during this school holiday period in Sydney was Monte Carlo. It was the 10:30 session on the first day of school holidays so I wasn’t expecting it to be overly full with school kids and teenagers, I thought they may want to sleep in on their first day off.
But I was wrong. The cinema was full with girls ranging in age from 10 to 18. I have to say it’s been years since I was in such an audience at a cinema. The last time was probably when I was in that age bracket. It was quite an interesting audience to observe. There was much giggling and a lot of talking during the film about how Selena Gomez was crying because Justin Bieber wasn’t there and when the object of the girls affection was going to show up and save the day.
An interesting thing I found was how different girls in this age bracket act when at the movies and the opposite sex isn’t there. I’ve had many experiences where I’ve been in the same cinema as boys and girls of that age bracket and it was far less pleasant. The guys show off by mocking the characters in the film and making funny sounds, while the girls laugh at all the jokes and laugh at serious moments in the film. As I said, it’s been awhile since I witnessed these girls in a cinema without the opposite sex, and I find them not quite as obnoxious as I thought they were. It’s all just an act for the opposite sex!
Was I ever like that too?
These are my own words and here is my review.
Review
Monte Carlo is the teenage girl’s dream from the onset. Cast wise it is a combination of Disney, Gossip Girl and Glee placed in French locations, and these may well be the only reasons people will appreciate Monte Carlo.
The film is very predictable and cliché, as well as very over the top with its prettiness. It perfectly caters towards its target audience, but anybody who isn’t a female between the ages of 10 and at the very most 18 will find this piece of cotton candy sickly sweet.
Grace (Selena Gomez), her friend Emma (Kate Cassidy) and her step-sister Meg (Leighton Meester) travel from Texas to Paris only to find out that the organised tour they are part of is an absolute disaster. When a case of mistaken identity occurs and Grace is mistaken for troubled heiress Cordelia Winthrop Scott (also Gomez), the girls are presented with a chance of a lifetime to travel to Monte Carlo and stay for a week in complete luxury.  Each of the girls falls head over heels for the city and the men they find in it. However, things were never going to go smoothly when the real Cordelia Winthrop Scott shows up.
The best thing about Monte Carlo is the backdrop of Paris and then of Monte Carlo. Seeing these two places on the big screen is enough to want to pack your bags and be off. However, the introduction of these towns on the screen by placing its name on the screen is very 1950’s/60’s, but not in a good way. It’s very out dated.
The script is extremely cheesy and the outcome completely predictable. The film is just so focused on giving its stars screen time and showing off all the fashion and gorgeous landmarks, that it forgets about doing anything else well.
The performances aren’t of a great standard really. Gomez is sweet but bland as Grace and she is actually more interesting when she is playing the obnoxious Cordelia. Leighton Meester has some good moments but she doesn’t come across as quite so bad as everyone makes out. Yes she complains a lot of the time, but the role could have afforded some of the evil she brings to the TV screen as Blair Waldorf. Katie Cassidy’s performance is so forced and quite irritating really and Cory Monteith, who plays her Texan boyfriend, doesn’t really seem to be acting, more just walking through the film saying lines. Some may say its natural, some may say it’s boring.
Monte Carlo is extremely audience specific. An extremely girly film which will satisfy the need for all the adolescent females who are looking for something to do over the school holidays. Nobody else really.
3.5/10
Posted by NP1982 at 7:02 PM